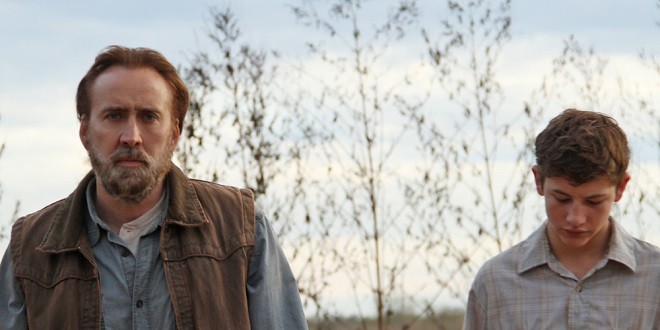 Posted by: Steven on April 13, 2014 in Movie Reviews Leave a comment

Director David Gordon Green, who followed up the indie break-through George Washington (2000) with movies of widely erratic genres and budgets, appears to be positioning himself as the next generation’s Steven Soderbergh.  Sporting jeans, a button down, and a cap covering a shaved head, he even looks like Soderbergh.  Like Soderbergh, Green’s prolific output – as both director (Snow Angels (2007), Pineapple Express (2008)) and producer (Shotgun Stories (2007), The Comedy (2012)) – has been quite a mixed bag.  And yet, to many cineastes, there is a certain hopeful allure to each release.

At a recent Q&A in his hometown, Green responded to a rather pointed question about his most recent film Joe as follows: “Some people can throw a baseball really fast; some people are good at math; I can cast the shit out of a movie.”  Indeed. Nicolas Cage’s take on the title character might be his most authentic performance in well over a decade, for better or for worse.  The now old enough to drive Tye Sheridan has added one more impressive performance to what has essentially been a regional career that has garnered national attention (Tree of Life (2011), Mud (2013)).  And in rounding out the cast in this adaptation of Larry Brown’s salty novel, Green and company prove to be more adept at finding talented semi-pros and non-pros than most indie darlings (eg, Adam Leon).  (In a Texas-sized tale within a tale, big screen newcomer Gary Poulter, who plays the primary antagonist with a haunting sense of reality, was homeless when casting scouts found him; but within months after shooting and shortly after receiving a diagnosis of cancer, he was returned to the streets and was found face down in a foot of water in Lady Bird Lake – apparently having drunk himself to death.)

As evident from the trailer, the almost insurmountable hurdle with Joe is that we’ve seen this melodrama before (ie, stranger in need of redemption steps up to the plate to help abused teen before he/she is forced to make irreversible mistakes).  In this case, Green takes a distinctly undisciplined approach to the narrative. In terms of adding some subtlety and grit, it works well; but it also makes for a film sorely lacking in an essential rhythm – unsure of what it really wants to be.  The few moments of levity are crammed into a single sequence, too late in the game to build character or eschew the inevitable well-worn plot.  The net effect is ultimately less fulfilling than it really should be.

Expressing an appreciation (or lack thereof) for all sorts of films for over 25 years.
Previous: Nymphomaniac (2014)
Next: Blue Ruin (2014)