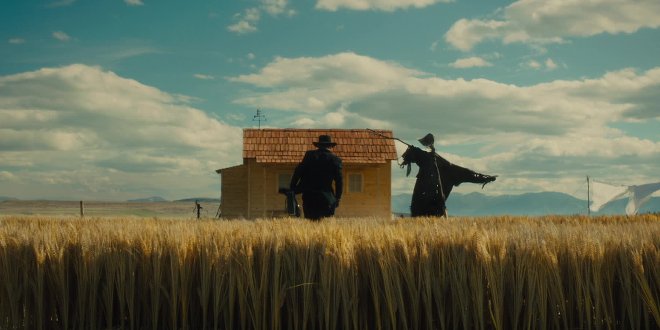 Posted by: Steven on January 16, 2016 in Other Stuff Leave a comment

10. Slow West.  “Once upon a time, 1870 to be exact, a 16 year-old kid traveled from the cold shoulder of Scotland to the baking heart of America to find his love …”  In his feature film debut, writer/director John Maclean offers us a post-deconstruction reconstruction of the Western as haunted folk ballad.  To be sure, we’ve seen and heard all of this before – the contrast between the idealistic and the world-weary characters; the culminating shoot-out; the enigmatic one-liners (“In a short time, this will all seem like a long time ago”).  But while Maclean’s version of the American West is austere, his filmmaking is anything but, and his production and cast anything but American.  Go for Michael Fassbender and Ben Mendelsohn sending the scenery to the spittoon; stay for Kodi Smit-McPhee as the ghostly romantic and Caren Pistorius as the anti-Manic Pixie Dream Girl.

9. The Gift.  Contrary to what popular cinema normally suggests, most sociopaths don’t kill, rape, or assault.  Nonetheless, if their careful calculations expose no real risk of consequences, they will do awful things just because they can, and any tears they shed will not be out of concern for the ones they’re supposed to love, but for the loss of a thing they feel entitled to.  They live comfortably among us, often without check – the extent of their savvy shrouded by an affable charm, making their venture to the top of the ladder seem like a casual stroll along the American way.  Joel Edgerton’s bold debut as writer and director distinctly refocuses the interloper thriller away from an abnormal pathology toward a very normal one.  Edgerton the actor unsettles in a consistently low gear, Jason Bateman is effectively cast both to and against type, and Rebecca Hall may just be the most valuable player as our searcher for the truth.

8. Anomalisa.  Although Anomalisa‘s award nominations have been limited to recognizing the stop-motion animation (which has been widely reported to include naughty bits), writer/co-director Charlie Kaufman and Duke Johnson’s film relies as much on its voices as the physical construction of its characters (who literally show their seams).  This relatively modest story (set one night on a business trip in Cincinnati) feels more a radio play turned cinematic ex post facto.  And thematically speaking, the credits listed on imdb (Tom Noonan as “everyone else”) turn out to be a spoiler.   The bottom line: there just are not enough Kaufman films in the world.

7. Kumiko, the Treasure Hunter.   The pitch for a movie based on the urban legend of a Japanese woman who traveled all the way to the Minnesota tundra to find the loot buried in another movie (Fargo (1996)) – with the former even going so far as to replay the false intro (“this is a true story”) to the latter – all sounds a bit too cute for its own good.  But David and Nathan Zellner’s Kumiko, the Treasure Hunter is not so much an exercise in meta-cinema as a remarkably empathetic portrayal of one individual’s devolution from disillusion to delusion.  With the quiet but distinct power to the performance by Rinko Kikuchi as the woman in search of her own saga, it is difficult not to share her disdain for the office ladies or impulse to crush her SIM card into oblivion.  (See original review here.)

6. It Follows.  In an eternal suburbia, where box TVs and stylish e-readers seem to coexist free from parental intrusion, teenagers need to find something to do when the nicotine, the cherry cola, and the Dostoevsky are just no longer cutting it.  Oh, you know what they’re doing.  And you know what happens when they do it in an ’80s horror film.  So does writer/director David Robert Mitchell, who conjures up the best elements of that period’s genre to tap into the primal stuff of nightmares.  Although one could certainly argue that Mitchell lets the subtext dictate a bit too much of the plot, It Follows is one of the creepiest, most provocative horror films of the last decade and the highlight of a year characterized by films that pushed the genre’s boundaries.  (See “A Nightmare on 8 Mile Road: It Follows”.)

5. The Revenant.  To be sure, director Alejandro G. Iñárritu’s The Revenant faces certain uphill battles in terms of audience expectations and what the film is not.  The marketing – touting its basis upon the “true” tale of abandoned frontiersman Hugh Glass’ – does a certain disservice to the product by evoking the likes of 127 Hours (2011).  And in the minds of certain critics, Iñárritu’s choice of cinematographer extraordinaire Emmanuel Lubezki has prompted rather presumptuous comparisons to the films of another director of Lubezki’s distinctive work – film school darling, Terrence Malick.  Taken on its own terms, The Revenant is a Big Mythological Western, impeccably realized, and notwithstanding occasional shifts between the brutally visceral and the hazily dreamy, its concerns are sublimely simple: survival, loss, revenge.  As such, this epic is particularly well served by the immersive roaming eye that has now come to characterize the Iñárritu/Lubezki team (albeit scaled back from Birdman (2014)), the sub-enigmatic portrayal of Glass by Leonardo DiCaprio, and the channeling of Tom Berenger’s Sgt. Barnes (Platoon (1986)) by Tom Hardy.

3. The Big Short.  Adam McKay is a mainstream screenwriter/director (Anchorman: The Legend of Ron Burgundy (2004)), and his adaptation of Michael Lewis’ biography of the global financial meltdown of 2008 is a mainstream movie, with all of the aspirations to entertain that such a label entails.  But therein lies the substance within the form: the over-the-top, fourth wall-breaking, celebrity-cameo’d ways that McKay conveys the dire details to us is as much an indictment of contemporary America as the subject matter of the film itself.

2. Me and Earl and the Dying Girl.  At this point, I should own up to my own subjectivity, having grown up in the ’80s and becoming a cinephile in the ’90s; but Me and Earl and the Dying Girl is no guilty pleasure.  As the title indicates, this terminal teen girl’s story is told from the perspective of a teen boy, with writer Jesse Andrews and director Alfonso Gomez-Rejon liberating that narrative from the commercially familiar territories of star-crossed romance (The Fault in Our Stars (2014)) and fantasy fulfillment (If I Stay (2014)).  What we’re left with is well-trodden, but lovingly-rendered, brimming with both referential humor and earned poignancy.  Very few filmmakers can pull off an attempt to simultaneously subvert, and indulge in, the tropes that define its genre; but for me, Gomez-Rejon does.

1. Ex Machina.  Widely viewed as (yet another) cautionary tale regarding artificial intelligence, one might also appreciate writer Alex Garland’s impressive directorial debut as a twenty-first century twist on the creation myth (with the “deus” conspicuously missing from the title).  There is a delicate balance to be reached with sci-fi – most filmmakers tend to spoon-feed the themes, leaving the viewer with a rather empty experience (e.g., Jurassic World (2015)); other filmmakers are too coy and noncommittal, resulting in films that may drip with atmosphere, but offer little to really chew on (e.g., Under the Skin (2014)).  In this case, Garland never lets the subtextual potential dilute Ex Machina‘s potency as a chamber thriller.  (For more spoilerly love, see “My Favorite Film of 2015: Ex Machina”.)

So there’s my top 10 of the 115 films I viewed that were released theatrically in the U.S. in 2015 – to my sensibilities and experience, a relatively strong year for genre movies (Westerns and horror, specifically), but a relatively weak year in just about every other respect.  And just for kicks …

My choices for the most underseen films of the year (I’m talking to you letterboxd followees):

My choices for the most overrated films of the year (I’m talking to you metacritics and imdb users):

And setting aside some issues I had with the pacing and the dialogue, I feel compelled to give a special jury prize to the audacious genre mashup and feature film debut of Craig Zahler, Bone Tomahawk, for the coolest title and retro movie poster, the best performance by Kurt Russell in a Western (yeah, I know, at this point you would think I was describing the latest by Quentin Tarantino), and (look away now!) the single most indelible image from any film of the year (for the living women of the Troglodyte tribe):

Tagged with: Anomalisa Ex Machina movie It Follows movie Kumiko the Treasure Hunter Me and Earl and the Dying Girl Slow West The Big Short movie The Diary of a Teenage Girl movie The Gift movie The Revenant

Expressing an appreciation (or lack thereof) for all sorts of films for over 25 years.
Previous: The Hateful Eight (2015)
Next: My Favorite Film of 2015: Ex Machina