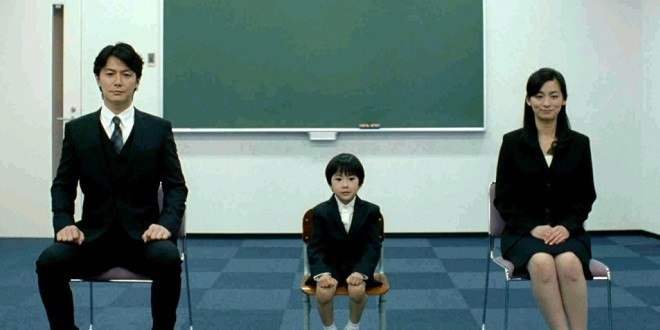 Posted by: Steven on February 25, 2014 in Film Essays Leave a comment

In my 30s, I had two conversations with friends of a like age who were having problems conceiving and were seeking medical intervention.  After they suggested that my disinclination for having children was really born out of selfishness (you know, in that way only friends can), the next exchange went something like this …

Me:  “With so many unwanted children in the world, why don’t you just adopt?”

Aspiring mother/father:  “I want a child that is a part of me.  Besides, you don’t know who you’re really getting when you adopt – the mother could have been a drug addict or worse.”

Mind you, this was the response of would-be parents who – unlike me – were unselfish.  But it occurred to me that, in the realm of parenthood, we as a society tend to look at this particular manifestation of pride and ego as understandable – nay, a positive thing.  In Like Father, Like Son (2014), writer/director Hirokazu Kore-eda questions those norms by pointing out what would be obvious in any other context: pride is only a good thing until it’s a sin, and ego is ultimately incongruent with love.

The film opens with an interview between elementary school officials, a father Ryota (Masaharu Fukuyama), a mother Midori (Machiko Ono), and a son Keita (Keita Nonomiya) – looking very much like a part of the parents.  Although the family is a united front against the outside world, we learn very quickly that there are competing forces within the unit.  Ryota is the professional, taskmaster father; Midori is the stay-at-home, “kind” mother; and perhaps Keita gets more of his characteristics from the mother.  As routine blood tests are performed for school admissions, the administrator of the hospital where Keita was born informs Ryota and Midori that due to a mix-up, Keita is not Ryota and Midori’s natural-born son; rather, their actual natural-born son, Ryusei (Shôgen Hwang), had been switched with the son of a modest shopkeeper, Yudai (Lily Franky), and his wife, Yukari (Yôko Maki).  Although the promotional poster shows the two families in the following photograph … 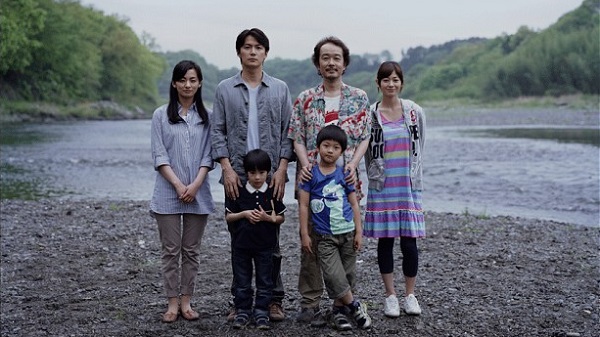 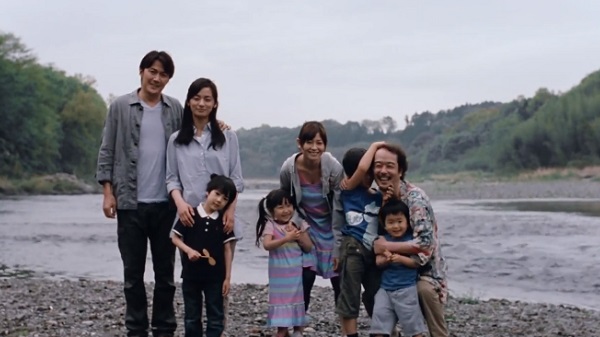 In episodic fashion (with some curious choices in terms of scene transitions), Kore-eda explores both the interfamily and intrafamily dynamics of the situation, such as they are, stripped of melodrama.  Wrestling with the complexities of each individual human being never takes a back seat to any sort of explicit message.

But despite the suggestion of the image on the promotional poster, Kore-eda’s narrative perspective is decidedly not democratic.  Kore-eda chooses to devote the most of the time to the character who has the most issues with mixing blood and water – Ryota.  Class certainly becomes a factor, but only in so much as it informs Ryota’s self-consciousness, as we learn later on in the film.  From Ryota’s perspective, not only is this child they have raised for six years not his, but his child has been raised by an individual he initially sees as a buffoon.  When Ryota’s initial attempt to have his cake and eat it too is rebuffed, the pressure of the inevitable choice eats away at his ego.  Should he keep Keita, whose apparent lack of talent in playing the piano may be a symptom of his natural father’s clearly deficient genetics; or should he attempt to de-program six years of nurture from his own progeny?  Perhaps Yudai has something to teach Ryoto about fatherhood.  Perhaps the children could teach them all something about parenthood.  Perhaps, perhaps, perhaps.

Despite being Ryota’s story, Kore-eda never short-changes the other characters, their relationships, or the relative roles they play in the sociological strata.  Although the fathers appear to have the formal decision-making authority in resolving the underlying dilemma, in the midst of the many sober scenes of bubbling turmoil, we are reminded that each of the two mothers have the inclination and the ability to change the outcome in dramatic ways. 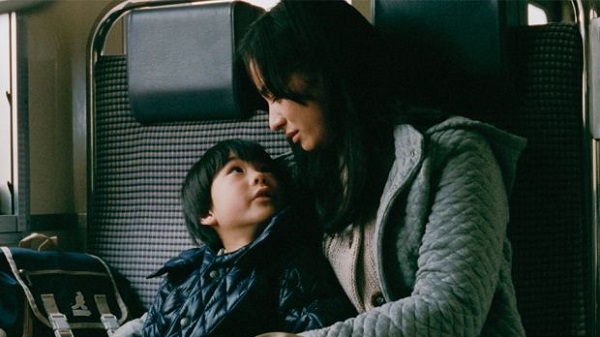 We learn very early in the film that the respective mothers were the ones blamed (in one way or another) for the outsider’s perception that the children – even as infants – did not look enough like their parents.  And to a certain extent, another mother’s reaction to a narrow narcissistic definition of parenthood turns out to be the cause of the situation.  Clearly, not all of the burdens of social norms are shared equally.

For better or for worse, Kore-eda is often heralded as the artistic heir apparent to Japanese director Yasujiro Ozu (although in this case, I found myself reminded of the first half of Akira Kurosawa’s High and Low (1963)).  Comparisons aside, Kore-eda exhibits a unique penchant for organically – seemingly effortlessly – infusing sociological critique within a psychological reality.

Expressing an appreciation (or lack thereof) for all sorts of films for over 25 years.
Previous: Visitors (2014)
Next: The Grand Budapest Hotel (2014)