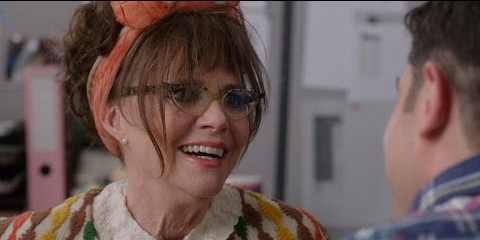 Posted by: Stacey on January 15, 2017 in Other Stuff Leave a comment

I’m turning it up to eleven** this year.

11. Hello, My Name is Doris. Just after the death of her mother, sixty-ish Doris (Sally Field, who’s managed to maintain all the quirky energy of Gidget) falls for a co-worker thirty years her junior, but of a similar emotional maturity as she’s spent her life caring for her mother in lieu of having her own relationships and life. Her journey as the latest of late-bloomers is hilarious and heartfelt and Sally Field is brilliant.

10. 10 Cloverfield Lane. I went into this film with low expectations because I was unimpressed with the original Cloverfield. But it had me on the edge of my seat trying to figure out exactly what the protagonist’s circumstances were, who she could trust, and where the plot would go. This film is a truly thrilling experience.

9. Allied. Watching Allied felt similar to reading a psychological thriller. A historical psychological thriller set during World War II in which an intelligence officer marries a spy, ultimately fearing that their entire marriage is a lie. And it’s directed by Bob Zemeckis, who sparked my love of movies in 1985 with Back to the Future.

8. Barry. Despite relegation to Netflix, this is the Barack Obama biopic to see. It is a rumination of what Obama’s first year at Columbia might have been like. Freshman Obama is young and cool, smart and thoughtful, and he drops a lot of f-bombs. Devon Terrell nails Obama’s look, voice, speech patterns, and mannerisms. I’m glad I got to see it on the big screen at TIFF.

7. Nocturnal Animals. With Nocturnal Animals, you get two stories for the price of one: the story of Susan, a former starving artist who’s become her much-hated bourgeoisie mother, and the novel written by her still-artist ex-husband, which Susan interprets as revenge fantasy over the end of their relationship. Director Tom Ford weaves the narratives of Susan’s past and present with her ex-husband’s perspective via the novel so expertly that the final scene is utterly heartbreaking despite its banality.

6. Sausage Party. Oh, what to say about Sausage Party. Well, spoiler alert: it’s a (hard) R-Rated animation in which anthropomorphized food items find out that the “gods” (shoppers) take them home to eat them, not to the blissful “great beyond” as they’ve been told. The allegory isn’t subtle, but it is executed with side splitting humor and an impressive cast including Kristen Wiig, Seth Rogen, Jonah Hill, Bill Hader, James Franco, Michael Cera, Salma Hayek, and Ed Norton.

5. Wiener Dog. As the title suggests, this is the story of one wiener dog, who has four different owners in his lifetime. We get to know these four unrelated parties, and their particular personalities and circumstances, with this dog as the common thread tying each vignette together. The picture I chose is of Greta Gerwig, his second owner, reprising the role of Dawn Wiener from Welcome to the Dollhouse. There’s much to unpack in this film, with each owner increasing in age, a character who is the artistic antithesis of Solondz himself, Ellen Burstyn’s character (his final owner) reflecting bitterly over the person she could have been, and an actual intermission in a 90 minute movie.

4. Tower. The 1966 Tower Shooting at the University of Texas at Austin is a valuable example of an event that forced the people involved to learn about and confront their humanity. In those moments, they had to decide to be brave or cowardly, to hide and ensure their own safety, or risk their lives to help others in danger. The documentary is a mix of interviews with those involved and rotoscoping animation (drawing over live action footage of actors) that stays focused on the terror of that day and the pride or shame the participants have lived with ever since. Be prepared to cry.

3. La La Land. Damien Chazelle has come out of the gate with two top-notch films, Whiplash and now La La Land, both with a focus on music. La La Land is the story of a musician and an actress who, despite a genuine connection and profound impact on each others’ lives, couldn’t have achieved their respective dreams if they’d stayed together. It’s an original musical, with original songs, and real song and dance numbers – like nothing else you’ll see this year. Neither Emma Stone nor Ryan Gosling are particularly strong singers, which makes it feel intimate and non-Broadway in a way it never could have if Chazelle had cast Anne Hathaway types. The film feels both earthy and magical, while packing a strong emotional punch.

2. The Lobster.  In the story world of The Lobster, members of civilized society are not allowed to be single. Colin Farrell’s character, having just been left by his wife, enters “The Hotel” where he has 45 days to procure a mate or else be turned into an animal of his choice. His brother is by his side, in the form of a dog. Theories abound, attempting to tease meaning from the Kafka-esque absurdity. I think writer / director Yorgos Lanthimos simply crafted an extreme case of the often ridiculous norms so ingrained in our culture that we fail to question them.

1. Arrival. Arrival is the story of a linguist who’s been recruited to attempt communication with aliens. Watching how Amy Adams’ character rises to that task is intriguing enough. However, as her communication deepens, the aliens give her an extraordinary power that results in a difficult and poignant decision. This film has both sciencey nerdity and emotional depth, so it gets my #1 spot.

I'm no film buff like Steven. My favorite movies before meeting Steven (which would reflect my taste independent of his influence) were Memento, The Game, Young Frankenstein, and the Princess Bride. The best movies I've discovered since meeting him include Mulholland Drive, Eternal Sunshine of the Spotless Mind, Synecdoche NY, A Serious Man, Inception, Black Swan, Melancholia, and many more that I'm not thinking of right now...
Previous: He Said: Top 10 Films of 2016
Next: A (Self-Conscious, Self-Righteous) Appreciation of Get Out (2017)