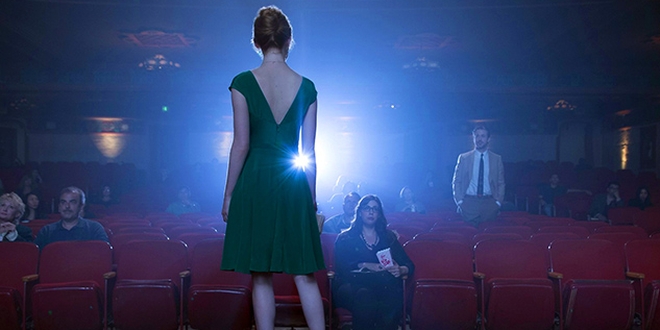 Posted by: Steven on January 12, 2017 in Film Essays Leave a comment

In perusing the year-end lists and reviews, I noticed a trend whereby professional and non-professional cinephiles alike seem to register a measured – if not, suspicious – appreciation for writer/director Damien Chazelle’s awards-bound musical, La La Land.  Chazelle certainly offers up plenty of familiar beats for those film-spotters to (a) hold up as homage or (b) dismiss as derivative (depending – in large part, I would surmise – on the often unacknowledged subjectivity of each individual).  Add in Justin Hurwitz’s unapologetically jazzy ’50s-era score, and I can surely understand the temptation to discount La La Land as an exercise in pastiche or sentimentality, soon to be forgotten like other Oscar darlings of years gone by (e.g., The Artist (2011)).  Nonetheless, it would be quite a stretch to lay the charge of mere nostalgia-for-nostalgia’s sake against this particular film.  In a number of ways (including the casting of Ryan Gosling and Emma Stone as the star-crossed lovers, Sebastian and Mia), Chazelle clearly isn’t limiting his reach to a demographic that witnessed – or wishes they had witnessed – the heyday of musicals.

But before extolling the merits of a Hollywood musical released in 2016, I feel like a diversion is in order.  That is, in exercising the cultural sophistication necessary to filter out the archaic when it comes to truly appreciating “timeless” classics, I find that certain cinephiles also fail to fully appreciate the ephemeral quality of popular film.  I submit that there is an element of Zen to the genuine pursuit of any art – an immediacy, a capturing of a moment – that serves its primary audience, but also undermines our romantic notions of the impermanence and immortality of the form (a distinction that is often drawn between film and theatre).  Accordingly, sooner or later, and to a greater or lesser extent, all films become dated – losing a degree of connectivity – to younger and younger generations of viewers.  And why not.  Like any other artists, writers/directors/actors must draw from – and subsequently build upon – a common language or form in order to reflect their changing reality. 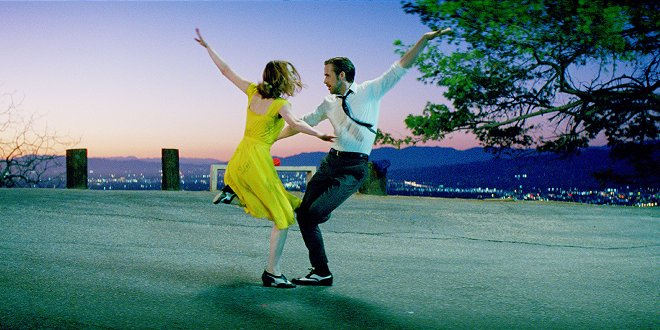 While Chazelle adopts some very specific language and form from a rather dusty era, he also recognizes the needs of his audience in 2016.  While defying reality in all the ways we associate with this particular genre, there is a certain inflection point when La La Land stops being a typical frothy musical throwback (as David Ehrlich put it, “a romance about movies”) and starts getting real (“a movie about romance”) – a scene at a kitchen table, which is, to my mind, as adeptly written and performed as any scene in a mainstream drama released this year.  The simple characterizations we might otherwise be willing to forgive as par for the genre give way to something that is, relatively speaking, a little more ambitious, a little more serious, and a little more resonant to a contemporary crowd.  And why not.  After all, the vast majority of us were weaned on cinema after the proliferation of method acting and the emergence of the New Hollywood, both of which followed the golden age of musicals.

I can’t say whether Chazelle strikes the right balance of historical and modern sensibilities in making his case for the “continued relevance and urgency” of musicals.  And I can’t say whether he has successfully wrestled the Hollywood musical away from the dominant and narrow purview of Disney and the Broadway franchisors.  Only time will tell.  But I am glad that he’s trying.

I would also submit that, apart from this context of La La Land and its well-trodden path, the film works so well on its own terms because Chazelle is so passionately proficient at approaching the material (a love story) from a perspective he knows best – that of a traditionalist, in more ways than one (“Why do you say it’s ‘romantic’ like it’s a bad word?”).

The drama in La La Land is older than cinema itself: the road taken by those like Sebastian will inevitably lead to heartbreak, in more ways than one.  Sebastian knows this.  Chazelle knows this.  But in the end, they just can’t help themselves.  And we as viewers don’t have to be aspiring musicians, actors, or Hollywood navel-gazers to empathize with the poignant effects of compromise and change.

Notwithstanding this predominant textual perspective of Sebastian/Chazelle, there is also a certain balance achieved by the weight of Stone’s performance.  And for me, being thrust into the era of autotune and CGI many years ago, the effectiveness of that performance is not so much about the quality of her vocals or her steps as it is about her ability to communicate with her face – whether she’s ambivalently sharing in Sebastian’s performance as a sub-pop star; whether she’s taking one too many shots across the bow from Sebastian; or whether she’s delivering a bruised and beaten “torch song” riff on “The Rainbow Connection”.

All that said, I believe it would be appropriate to conclude this exercise in piling on by owning up to my own subjectivity, my own contradictions.  I’ve never been much of a fan of musicals, due to my age and a deficiency in applying those filters necessary to emotionally connect with much of the Old Hollywood.  To be sure, when I was introduced to cable television in the ’80s, I was just as enraptured by the relative novelty of West Side Story (1961) and Grease (1978), as were many of the other kids; but even to this day, as an adult, I find the MGM musicals (e.g., Meet Me in St. Louis (1944)), as well as later “masterpieces” like The Umbrellas of Cherbourg (1964) (Chazelle’s primary inspiration), to be insufferably quaint.  And yet, I would characterize a TIFF screening of La La Land as my most memorable cinematic moment of the year, joining the audience at the Elgin Theatre in applause following the six-minute single-take opening, “Another Day of Sun”, which bursts with bittersweet exuberance atop an L.A. overpass – a bottleneck of traffic amidst the world’s foremost bottleneck of dreams.

And to echo the sentiments I have previously expressed toward Chazelle’s work, if you can get that tune (or “Someone in the Crowd” or “City of Stars”) out of your head, then I genuinely feel sorry for you.