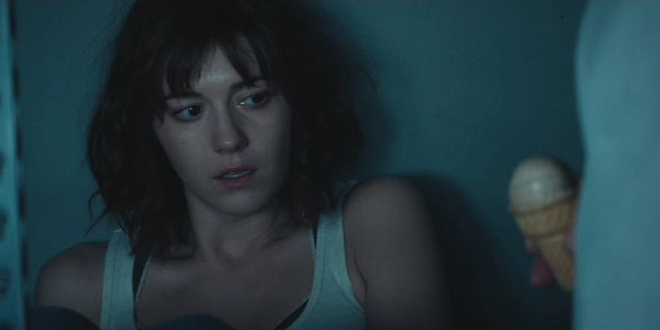 Posted by: Steven on January 12, 2017 in Other Stuff Leave a comment

10. 10 Cloverfield Lane.  In the U.S., most of the hard-earned cash being dropped at the cineplexes is devoted to franchise films (that is, 16 of the 2016 top 25 were prequels or sequels to, or remakes or adaptations of, established franchises).  Call it a Pavlovian response to a marketing-induced supply.  Call it the reality of modern demand.  But in a year when the box office champions doubled down on the more-is-more brand of fan service (Captain America: Civil War, Rogue One: A Star Wars Story), director Dan Trachtenberg and writers Josh Campbell, Matthew Stuecken, and Damien Chazelle (nope, that’s not a typo) teased audiences out of the kaiju-sized destruction of Cloverfield (2007) and into the claustrophobic thrills of 10 Cloverfield Lane.  This three-hander was not only smart and well-played by Mary Elizabeth Winstead, John Goodman, and John Gallagher, Jr., but it earned over 7 times its modest budget in the theaters.  Dear Hollywood: More of this please!

9. Tower.  On August 1, 1966, a sniper perched on the 28th floor observation deck of the Main Building – the signature feature the University of Texas skyline – killed 14 and injured 32 others before finally being overcome by three police officers and a deputized civilian.  Although the 96-minute ordeal has been memorialized with a 1975 TV movie and references in other films (e.g., Full Metal Jacket (1987)), it took 50 years for a proper documentary to emerge.  In his second feature, director Keith Maitland injects rotoscoping animation and a subtly menacing sound design into the mix of traditional elements to breathe a ghostly sense of life into the various narratives of the witnesses.  And Maitland takes 74 minutes to even mention the name Charles Whitman, eschewing a futile search for answers to the inexplicable and focusing instead upon the nuances of shock and fear, heroism and cowardice, guilt and regret.  On paper, it all sounds a bit gimmicky; but on screen, Tower transcends mere commemoration of yet another moment of lost innocence in post-JFK America to arrive at a dreamy and devastating ode to the humanity of tragedy.

8. Barry.  In my book, one of the biggest tragedies of 2016 was that the Barack and Michelle date movie (Southside with You) enjoyed a wide release in theaters, while director Vikram Gandhi and actor Devon Terrell’s feature debut – a refreshingly subtle imagining of the eponymous character’s first year as an undergrad at Colombia U. – was relegated to Netflix streaming.  In exploring one of the more opaque periods in the life of one of the of the most significant historical figures currently walking the planet, Gandhi (mostly) veers away from the box-ticking approach that we have come to expect from the typical biopic.  And the script by Adam Mansbach is (almost entirely) devoid of any predictable proselytizing about race (which, come to think of it, may explain the film’s lack of attention from the echo chambers on either the Left or the Right).  Instead, building from a limited set of facts, Gandhi revs up the empathy machine by filtering the common burdens of a (mostly) black man navigating NYC circa 1981 through the prism of individual experience.  And as Gandhi and Mansbach refuse to pander to reverential expectations, Terrell (largely) refuses to pantomime, confidently relying upon his own voice and body to render a remarkably authentic 20 year-old Barry.

7. Green Room.  Green Room opens with an aerial shot of a van that has driven off the road into the padding of a cornfield with its engine run dry.  A count-in to a punk record cuts abruptly to the silent turntable stuck in an endless loop.  A true believer passes out with an anesthetizing needle still in arm.  And a generation drifts – off into a combustible milieu of angry music and angry politics, landing in the wrong place and the wrong time, caught behind enemy lines.  With this follow up to Blue Ruin (2014), writer/director Jeremy Saulnier may just be the best (anti-)genre filmmaker working today, and although the genre may have shifted, his interest in reconsidering the elements of cinematic narrative remains consistent.  At one point in Green Room, as our (un-)intrepid band of characters sits trapped in a green room awaiting their fate, a rally speech about a paintball game is unceremoniously terminated – a thematic signpost, to be sure, as once again a familiar story becomes almost incidental to Saulnier’s distinctly (un-)cinematic take on violence.  It’s abrupt.  It’s messy.  And it’s not Hardcore Henry (2016).

6. The Handmaiden.  My favorite two-word review of 2016 was Josh Larsen’s characterization of The Handmaiden as “origami Hitchcock.”  Sure, we could talk further about that final scene on the ship being a bit too much, the male gaze/male manifestation of the female gaze, etc.  Indeed, all roads lead to a re-watch.  Nonetheless, while the post-Cannes critics’ cabal parroted the characterization of Toni Erdmann as  “the fastest”/“the shortest” 160 minutes one could spend in the cinema in 2016 (to which they doth protest too much, methinks), I would bestow that honor upon Park Chan-wook’s more disciplined, 144-minute pièce de résistance.  Bring on the extended edition!

5. The Neon Demon. The same kinds of appraisals seem to pop up with respect to the most recent, visually aggressive, genre exercises by director Nicolas Windig Refn (including Drive (2011) and Only God Forgives (2013)). But for me, the effectiveness of these films is not dependent upon whether the film is a weightless exercise in style or the style is the substance, whether the dialogue presents the plot and themes in a manner that is stilted or merely direct, etc. For all of Refn’s own expressions of intent when it comes to The Neon Demon (beauty, ego, what not), what we have is a horror film spawned from the L.A. grinder of young women and their dreams, more specifically, but more generally (and I would assert, more potently), the phenomenon of veminism. And the film’s placement on this list can be attributed to Refn’s undaunted level of commitment to his style and the degree to which its nightmarish images have continued to haunt long after viewing.

4. The Witch.  2016 was yet another strong year in terms of both alt-horror and filmmaker debuts.  One could attempt to squeeze some deeper meaning (historic or modern) from the enigmatic imagery of writer/director Robert Eggers’ auspicious debut (and there is no shortage of strained think-pieces out there attempting to do so); but when one simply accounts for the impeccable level of craft, The Witch works quite well enough taken on its own terms expressed right there on the promo poster – “A New England Folktale.”  That is, if one were a Puritan immigrant to the New World circa the 17th century, this is the tale you might tell to scare your rambunctious toddler, to re-align your teen’s wandering eye, to get your village parishioners in line, to fear nature.  Does a film really need to be anything else?

3. Arrival.  There is a certain irony to the best science fiction that imagines first contact with alien life: a focus on the most fundamental aspects of what it means to be human.  In this adaptation of the short story “The Story of Your Life,” the linguistic relativity experienced by Earth’s greatest translator (Amy Adams) is merely an entree into a timely contemplation about the consequences of how we choose to listen and how we choose to speak, and the plot’s machinations in non-linear time eventually resonate as manifestations of mortality and regret.  Yet somehow, between the punctuation of a few stunning visuals, director Denis Villeneuve manages to sit most of the narrative within the bust of a dreamy chamber drama.  As gratifying as it is to experience Villeneuve finally stick the landing, Arrival feels more like the sci-fi movie that Christopher and Jonathan Nolan should have made.

2. The Lobster.  This was a year when polarization in the West (or at very least, the effects thereof) hit a crescendo (at least in my lifetime).  The discontent wasn’t just about one or two issues – it reflected a much broader and deeper entrenchment behind political, religious, and demographic lines.  And it wasn’t just about one or two politicians – it was about all of us.  That brings me to Yorgos Lanthimos’ satirical masterpiece, The Lobster, which (among other things) proposes a world, parallel to our own, divided into two tribes – a police state and an underground, neither of which can reconcile its ideology with the other and both of which share a propensity for mandating how each individual should live his or her life.  Oh, and there was something going on about love and marriage too.  I submit that no contemporary filmmaker (Roy Andersson and Todd Solondz included) brings a finer, more pointed touch when it comes to black comedy or the “absurd.”

1. La La Land.  It’s 2016. Among our prime A-listers, we don’t have a Fred Astaire or Ginger Rogers; hell, we don’t even have an Olivia Newton-John or John Travolta. What we do have is Emma Stone and Ryan Gosling (Crazy, Stupid, Love (2011), Gangster Squad (2013)) and a learned and talented director (Damien Chazelle) who has the audacity to create (as opposed to adapting/stewarding Broadway franchises).  With Chazelle’s invocation of nostalgia for a once dominant cinematic form and generous helpings of Hollywood navel-gazing, La La Land is bound to pile on the nominations this award season; but it is not The Artist (2011), and although the contrast is meant to be a complement, I suspect that many Oscar spotters will be disappointed.  As David Ehrlich put it best, La La Land starts off as a romance about movies that becomes a movie about romance, and it is in that transition – and the accompanying shift in tone (and arguably, even genre) – where Chazelle takes a real risk before bringing it all home.  For me, that risk paid off. … for more spoilery love, see My Favorite Film of 2016: La La Land.

Expressing an appreciation (or lack thereof) for all sorts of films for over 25 years.
Previous: My Favorite Film of 2016: La La Land
Next: She Said: Top 11 Films of 2016