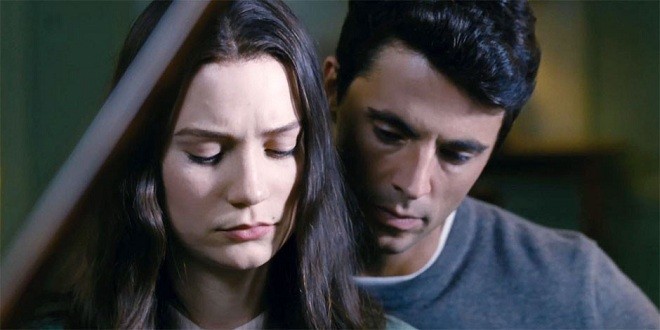 Posted by: Steven on March 24, 2013 in Movie Reviews Leave a comment

As an initial matter, I must disclose that I was not as enraptured as others with South Korean director Park Chan-wook’s Oldboy (2005), which has been remade for the mainstream U.S. audience by Spike Lee for release later this year.  But in the psychodrama Stoker, his first English-language film, Chan-wook’s carefully constructed visuals and sound design strike a perfect balance between the bold and the subtle, the lurid and the artistic – all of which serves the material admirably until the material no longer serves us.

India Stoker (Mia Wasikowska) has just turned 18.  Tragically, her father Richard (Dermot Mulroney), to whom she was much closer than her cloistered mother Evelyn (Nicole Kidman), died in a mysterious car crash on her birthday.  On the day of the funeral, the previously estranged uncle Charlie (Matthew Goode, who bears an appropriate resemblance to Mulroney) shows up at lush Stoker estate and decides to stay awhile.  As the plot thickens (read: bad things happen), Charlie makes welcome advances toward Evelyn and more subtle overtures toward India, the latter of whom suffers from that all too familiar malady – budding sexuality.  With Shadow of a Doubt (1943) as a starting point, the narrative quickly takes a right turn into Hamlet.

The emotional crescendo between India and Charlie arrives (perhaps a bit too early) in the form of an impromtu piano duet, which is destined to be one of the most memorable scenes of the year.  In lesser hands, the interplay could have devolved in a number of unfortunate ways, but Wasikowska and Goode sell it.  And Kidman’s performance is convincingly subdued.  But while good actors can elevate the material, they cannot completely rewrite it.

All of the wicked tension earned in the first two acts is ultimately deflated when we discover who Charlie really is and what his real motivations are.  Well, sort of.  And when combined with a subplot involving a suspicious police officer – seemingly shoe-horned into the endgame for no other reason than to get India standing the same spot she occupied in the opening shot – the third act proves to be a complete failure.

The Wikipedia entry indicates that this first screenplay by TV actor-turned-writer Wentworth Miller (with Erin Cressida Wilson (Secretary (2002), Chloe (2009)) credited as “Contributing Writer”) was included on the 2010 “Black List” of the 10 best unproduced screenplays – a fact that should not be read as testament to the strength of this film, but rather as a sobering indicator of just how low the bar has been set in Hollywood.  It’s too bad because Chan-wook and company were clearly up to the task.

Expressing an appreciation (or lack thereof) for all sorts of films for over 25 years.
Previous: Spring Breakers (2013)
Next: No (2013)