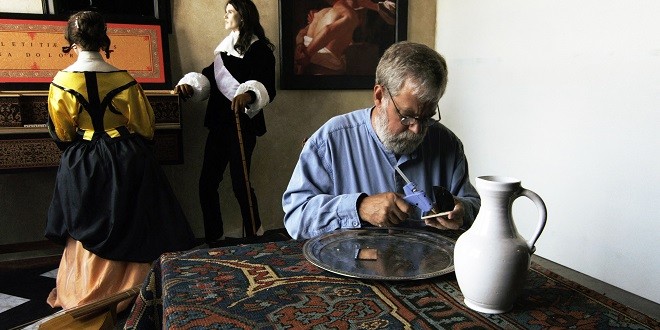 Any production by Penn & Teller is bound to be prejudged as bringing some baggage.  The duo were never content with their status as a decades-long fixture of the Las Vegas show circuit.  And through a variety of media, Penn & Teller have evolved into a manifestation of pure marketing irony – a magic act devoted to ridding the world of magical thinking.  Their war against woo culminated in eight seasons of the cable series, Bullshit, where these devout atheists and libertarians irreverently – but more often than not, convincingly – dispatched the true believers in everything from the efficacy of feng shui to the bible as a factual document.

Five years in the making, the documentary Tim’s Vermeer (directed by Teller, with Penn Jilette occasionally appearing to narrate) breaks only partially with that tradition.  In this case, the magical thinking is the idea that art is somehow the product of some other-worldly talent.  For our consideration:  the uncannily detailed and vibrant work of the Dutch painter Johannes Vermeer (1632-1675), which shall be subjected to the probing mind of Tim Jenison, a successful inventor of video technology who became obsessed with decoding Vermeer’s methodology.  Much to the consternation of the art historians, who are in the business of their own brand of god worship, Tim, a dilettante who lacks any formal art training, sets about answering the question for himself of whether it might have all been done with mirrors (literally) by reproducing every aspect of the production of Vermeer’s “The Music Lesson.”

For most of the screen time, Tim’s Vermeer is a straight-up, unremarkable exercise in building a case with the evidence.  And yet the villains (said art historians) are conspicuously absent, which marks the first distinction between this film and what might otherwise feel like an extended episode of Bullshit.  As the title suggests, in its best moments, the film is less about Vermeer and more about Tim.  Blessed with a skeptical mind, Tim is never dogmatic about his beliefs – acknowledging on more than one occasion that as convincing as his hypothesis-turned-exercise may appear, it “proves” nothing.  And that’s part of what makes his endeavor so compelling.

Tim is essentially a scientist, eager to take just one step closer to understanding the how, while simultaneously knowing he will never get there.  The true believers often criticize the scientists as the cold calculating party poopers – always wanting to pull back the curtain and ruin the magic.  But in one wonderful scene, after Tim has been granted 30 minutes alone with “The Music Lesson” in Buckingham Palace, we see a man who is no less convinced of the very mechanical means in which the masterpiece was produced, and yet, no less emotionally moved than probably any person on the planet by the experience of seeing it firsthand.  The blasphemous notion that this painting might actually be more akin to a photograph may ruffle the feathers of the true believers, but to the truly open-minded who can appreciate the creativity and toil of human ingenuity, the end result is no less awe-inspiring.  Amid all of the red herrings about the distinctions between art and science, maybe the only real point of the documentary – albeit one certainly worth of making – is that we need more heroes like Tim Jenison.