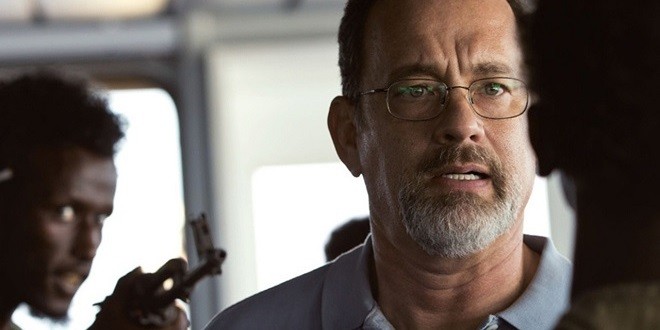 Posted by: Steven on October 29, 2013 in Movie Reviews Leave a comment

All filmmakers lie – by commission and omission, consciously and unconsciously.  If the narrative feature film sells the big lie as art, and the documentary sells the little lie as the truth, what is the role of the biopic?  It seems like a losing proposition to me.  Futile attempts to slavishy adhere to “all sides of the story” will invariably bore the audience (or worse); while any exercise of dramatic license is bound to be criticized as a failure to “accurately” portray “the facts.”  In any event, as a subgenre, the biopic is bigger than ever and is here to stay.  And the big biopic of this season is Captain Phillips, which chronicles the 2009 hijacking of a U.S.-based commercial vessel by four Somali pirates off the coast of Africa.

To add to the sense of reality, director Paul Greengrass makes generous use of the shaky, handheld camera – even when Captain Phillips and his wife are commuting on a Massachusetts highway.  But Captain Phillips lacks both the gravity and the subtext of Greengrass’ most famous biopic, United 93 (2006).  In the opening sequence of United 93, Greengrass set the context for 9/11 by visually contrasting the old world (with the terrorists praying to mecca in their darkened hotel rooms) with the new world (oblivious people with mobile phones plastered to their ears rushing through crowded highways, airport terminals, etc.).  Greengrass takes the same approach to the introduction of Captain Phillips, but any narrative or cinematic elegance is lost to expository dialogue.

In a recent interview, Greengrass stated that Captain Phillips explores the effects of globalization, while Tom Hanks (who plays the title role) posited that the movie is about a ship captain who is taken hostage.  As it turns out, Hanks is right.  If you are looking for a psychologically and philosophically probing Somali pirate film, see A Hijacking (2013); but as it is, Captain Phillips is an above-average cinematic exercise in tension – nothing more, nothing less.  And as the Jimmy Stewart of our generation, Tom Hanks serves the film by being good at being Tom Hanks.  (Actually, in all fairness, Hanks’ performance in a particular scene set in an infirmary is actually very good.)

Much has been made in certain circles of purported attempts by the filmmakers to foster sympathy with the impoverished Somalis.  But such efforts prove to be perfunctory at best.  The only revelation Captain Phillips makes about the Somali pirates is how primitive, unstable, and inept they really are.  (Do you think it would be a good idea to go barefoot on a high seas hijacking?)

In stark contrast, if there is a larger “message” that comes through loud and clear in Captain Phillips, it is that the U.S. Navy – and more specifically, SEAL Team 6 (of Zero Dark Thirty (2012) fame) – are totally awesome as the police force for the world.  (See, e.g., “‘Captain Phillips’ and Hollywood’s New Navy SEAL Cult,” Time (October 11, 2013).)  Whether that’s a good thing or a bad thing is beyond the scope of this review.

Expressing an appreciation (or lack thereof) for all sorts of films for over 25 years.
Previous: The Counselor (2013)
Next: When Horror Films Were Creepier: Stuart Gordon’s Re-Animator (1985) and From Beyond (1986)