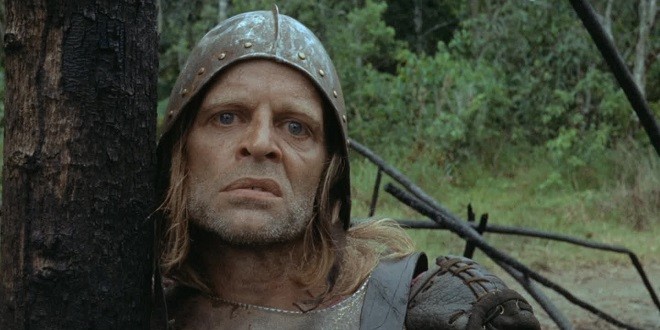 Self-esteem is a good thing.  And in the parlance of MBA types, people want to follow those who exude referent authority.  But there can an awfully fine line between the benevolent dictator who is capable of empathetic exchange and the pompous ass who believes his/her own press, and within a contemporary society engined by facets of democracy and capitalism, we individuals struggle to find that sweet spot.  To the precarious balance of our own psychology, add in the human need to be part of the better group.  From a crowded stadium at the World Cup to a bloodied desert of northern Iraq, the fundamental dichotomy of sociology is as evident as ever – we must be more evolved and more resolved than them.  But this essay is not about fine lines; it is about one of the more potent amalgamations of life and art in cinematic history.

Director Werner Herzog’s documentary of his relationship with Klaus Kinski, My Best Fiend (1999), begins with 1971 footage of the young actor, standing alone on a stage like a perversion of a stand-up comedian, spouting out claims of being the modern Jesus, rubbing the blasphemy in the nose of the heckling crowd, and brandishing his body against anyone who might question his intellectual authority.  Kinski’s face exhibits all the seriousness of the world’s classic fascists, while adding the element of explicit contempt for his clearly inferior subjects.   (See Jesus Christ Savior (2008).)  It is as if Herzog, a target of a number of counter-accusations by said fiend, is saying, “Look, I am really not making this Kinski character up.”

One day a theater critic had been invited for dinner.  He hinted at having watched a play in which Kinski had a small role.  He would mention him as “outstanding” and “extraordinary.'”  At once, Kinski threw two hot potatoes and the cutlery into his face.  He jumped up and screamed, “I was not excellent!  I was not extraordinary!  I was monumental!  I was epochal!”

So when it came to casting the title character in his international breakthrough film, Aguirre, the Wrath of God (1972), Herzog’s choice was painfully obvious, and as the documentary indicates, just plain painful.  But we cineastes reaped the benefits.  Perhaps more than any other film, Aguirre seamlessly combines both the individual and the communal aspects of the sin of pride.  And although film historians may argue over whether Herzog or Kinski won the battle over how the character of Lope de Aguirre should be played (the swaggering take prevailed), it is ultimately Kinski’s film – in more ways than one.

The historical context of Aguirre, which was written by Herzog and inspired by the writings of Brother Gaspar de Carvajal, is particularly significant.  After conquering the Incas, the emboldened Spanish conquistadors ventured into the interior of South America in search of “El Dorado,” a city of gold and cinnamon as related by the Muisca people of modern Colombia.  In 1541, Gonzalo Pizarro lead 340 soldiers and 4,000 natives on the third expedition for the fabled land, only to turn back after suffering debilitating losses from the ravages of nature and unfriendly tribes.  Europeans would continue to search for El Dorado all the way through 1780, but no gold was ever found – at least not above ground.  So much for the rumors of the vanquished.

As Herzog’s fictionalized account of the quest begins, Pizarro (Alejandro Repullés) and company are descending a steep and narrow trail into a jungle hell.  Eventually, traversing the thick bog takes a toll upon the caravan, burdened by its own pompous cultural affectations. 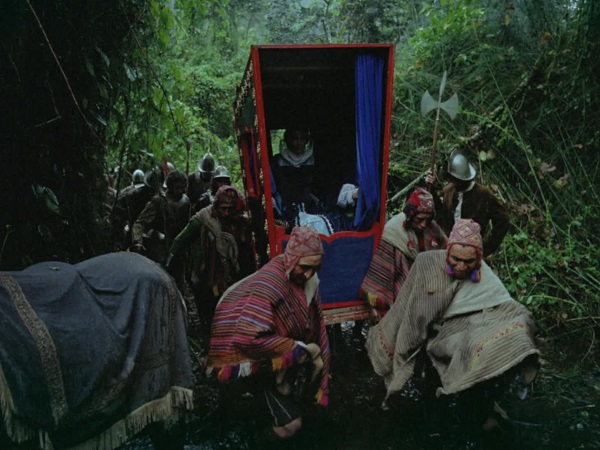 Unable to press on, Pizarro orders three dozen soldiers and slaves to raft down the river, scout the area, and report back to him within one week or be assumed lost.  He appoints Don Pedro Ursúa (Ruy Guerra), accompanied by his mistress Doña Inéz (Helena Raja), as commander, and Aguirre, accompanied by his teenage daughter Florés (Celilia Rivera), as second-in-command.  But no such expedition would be complete – and no genocidal intent to dominate would be legitimized – without the presence of the clergy, Brother Gaspar (Del Negro), who is always at the ready to spread the one true religion.

Their doomed journey becomes a devolution, highlighting the hubris of both a technologically savvy humanity in contest with nature, and an advanced society of imperialists in contest with a determined population of primitives.  Nowhere is this more evident than in an early sequence where formidable rapids cause one of the expedition’s rafts to become hopelessly stuck in an eddy inaccessible from the shore.  Later that night from the banks across the river, the rest of the group hears gunfire, and the next morning, discover the lifeless bodies of the remaining soldiers and slaves.  When Doña pulls Don Pedro’s strings to risk precious time – and more lives – to make sure the soldiers on the inaccessible raft receive a Christian burial, Aguirre orchestrates a coup and props up the only nobleman – the clueless Don Fernando de Guzman (Peter Berling) – to serve as the ostensible leader of the group.  And at the behest of Aguirre, de Guzman declares the group’s new sense of self-importance – an identity as a sub-empire.  But as they drift down river in a slowing current, more and more members of the group succumb to stealthy attacks by a cannibal tribe and the desperation of starvation.

By the time we reach the conclusion of a film that delves so broadly into the pride of mankind, we are left with the pride of just one man.

In melodramatic proportions, Aguirre’s hallucinatory internal dialogue encapsulates how self-righteousness serves as the key to accessing just about every other indulgence that might otherwise be considered a sin.  And although Kinski died in 1991, this particular outro has become even more unsettling in light of the relatively recent revelations of Kinski’s psychiatric history and allegations made by his oldest daughter.