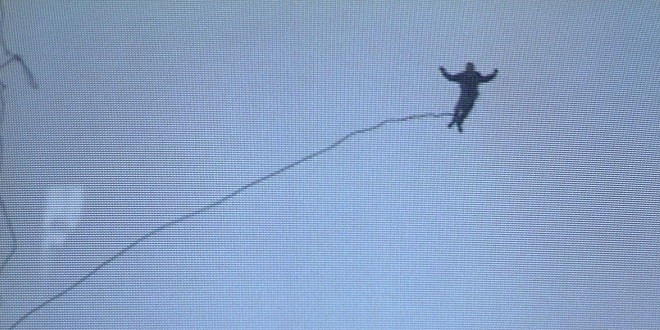 Posted by: Steven on October 4, 2014 in Film Essays Leave a comment

A husband who works 60 hours a week to provide a nice house for his wife and private school for his children might be the last person to whom we would apply the traditional label of “sloth.”  But at this point in the history of the traditional nuclear family, we also wouldn’t be surprised if he woke up one day to find his wife and children gone – physically and emotionally.  For all relevant purposes, laziness, neglect, and apathy all amount to the same thing – disengagement.

To be sure, each of us may have our reasons to turn away – some that may be rationalized and some not.  And lest we live in the final episode of Seinfeld, our society imposes few sanctions on the choice to ignore others – even those who may be in peril.  Yet in spite of – or perhaps, because of – this essential element of free will, sloth may be the most pervasive and damaging of all of the deadly sins – both to others and to ourselves.

Set in Paris in the midst of the reunification of Europe in the early 1990s, the first film in writer/director Krzysztof Kieslowski’s “Three Colors” trilogy, Blue, is a simultaneously personal and sociopolitical reflection upon both the idea of liberty (the corresponding color in the flag born of the French Revolution) and the disengagement that all too often results from the exercise thereof.  Notably, all three films of this loose trilogy are connected by one seemingly innocuous sequence that occurs in the presence of each of the films’ main characters: an elderly woman shuffles her way along a sidewalk to a recycling bin and strains to reach the opening to deposit a bottle.  In Red (1994), which deals with the attribute of fraternity, that character helps the woman.  In White (1994), which deals with equality, that character grins in recognition of shared hardship.  But in Blue, that character’s eyes are closed, blissfully unaware. 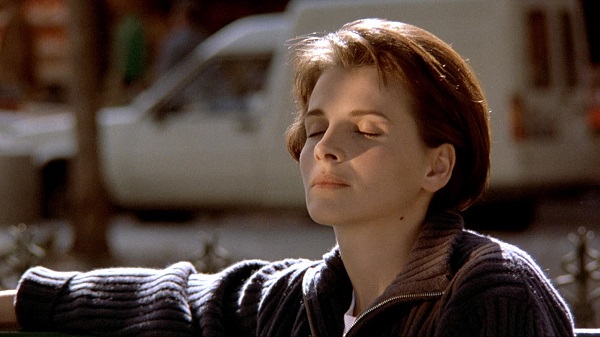 Yet Kieslowski doesn’t make it easy for us to judge his main character, Julie (Juliette Binoche), who suffers the worst of blows in the opening sequence of the film – the loss of her five year-old child and husband, a renowned composer in the midst of producing a score to celebrate the Unity of Europe.  Although the initial despair is understandably sufficient to suggest suicide, it’s clear that Julie can’t pass through that particular door.  Instead, she promptly settles her husband’s estate – ordering that their villa and all its contents be sold and the proceeds used to maintain their housekeeper, her gardener, and her mother.  And with nothing left in the villa but a mattress and a few trinkets, she makes a phone call to her husband’s dutiful musical assistant, Olivier (Benoît Régent), which begins with her abrupt question, “Do you love me?,” and ends with the flippant offer, “Come over if you’d like.”  When Olivier does arrive to consummate their previously unrequited relationship, she asks him to remove his clothing from across a dark vacant room; and right before she departs the next morning, she awakens her temporarily satiated lover with cold comfort: “I’m like any other women … you won’t miss me.”

With all open matters closed, Julie exercises her bitterly-earned freedom to leave her past life behind by assuming an anonymous apartment in the middle of Paris (with the request that there be “no children” in the building) and reassuming her maiden name.  She sits and sips in the coffee shop.  She dazedly smokes in her comfy new chair.  And in the midst of her new exile that dominates the second act of the film, Julie explicitly reveals her intentions to only one person from her past life – her mother, her sole tether to the world – an unnamed character who is institutionalized, separated from society by a dementia that leaves her unable to recognize her own daughter or retain a memory (the appropriately cast, Emmanuelle Riva, Hiroshima mon amour (1959)).

The pragmatic problem with disconnection is that it cuts both ways, which becomes apparent as Kieslowski’s sense of humor kicks in.  One night in her new apartment, Julie witnesses a man being beaten in any alley who manages to escape into her building.  She listens attentively as the victim frantically knocks on doors, doing nothing until the bustling subsides.  As she finally steps out of her apartment to investigate, a sudden gust blows through a window, slamming her door, locking her out, and forcing her to sleep on the stairwell.

And like wrath, there is a certain futility to detachment that often escapes the sinner, which Kieslowski chooses to handle with irony.  Not wanting to get involved, Julie refuses to sign a petition demanding that a “whore” be thrown out of the building; but her inaction ultimately provokes an appreciative visit from said whore (Charlotte Véry) and sparks a new relationship.

By the third act, even Julie realizes that no woman is an island, as she has to come to terms with the business that will never be finished – the piece of music she co-created and then attempted to destroy, the discovery of her husband’s mistress and unborn child, and the lover who has not given up on her.  And by the end of the film, Julie places another phone call to Olivier, now a collaborator, in a conversation that begins with the familiar question, “Do you still love me?,” and ends with the relenting declaration, “I’m coming over.”

Expressing an appreciation (or lack thereof) for all sorts of films for over 25 years.
Previous: The Seven Deadly Sins in Cinema: Aguirre, The Wrath of God (1972)
Next: Gone Girl (2014)