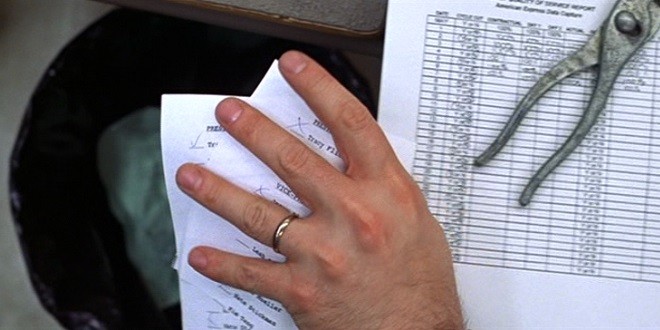 Posted by: Steven on September 21, 2014 in Film Essays Leave a comment

We sit on our couches in front of the TV, in our cubicles at work, or in the back of our spin classes where nobody can see us – watching that person.  We may want to be like that person, or we may just want the good stuff that person seems to get (without necessarily having the inclination or ability to do the things that person does to get that stuff).  Whatever the reason, that feeling is really all about us, as we respond by either striving in awe to replicate that person to varying degrees (see, e.g., The King of Comedy (1982)) or allowing it to feed our impotent depression and resentment.  Often referred to as the most joyless sin, envy can turn malignant – manifesting itself as a perverse elation in the pain and suffering of that person.  And if left unchecked, the rot of that simmering psyche will fertilize the seeds of self-destruction.

FADE IN.  It is early in the morning.  We are looking out from behind an active sprinkler in the middle of a football field, barely rotating.  In the background, a high school civics teacher (Matthew Broderick) – “Mr. M” to his students – makes his way to the track.  He runs around in circles, struggles through sits-ups and push-ups, showers vigorously in the gymnasium stall, and straightens out his tie within an un-ironed button-down shirt.  Meanwhile, a determined young woman in a plaid skirt (Reese Witherspoon) unfolds the legs of a card table, drops sticks of gum into a fishbowl pack by individual pack, presses the tip of her pen before carefully taping the end to a string, lays out two petitions with the handwritten description “Tracy Flick for President … Official Nomination Signatures,” and checks her watch as she waits impatiently for the school day to begin.   And so begins the tragic drama of director Alexander Payne’s black comedy, Election (1999).

As one of the four narrators of the film, Mr. M introduces himself to us as a four-time teacher of the year:

“Standing in front of a room full of young people, trying to get them excited about the world, trying to make them think, preparing them for the tough ethical and moral decisions they would face as adults.  That’s how I wanted to spend my life.”

Next comes the self-description by Tracy, who, while equally short on humility, is also brimming with both ambition and something Mr. M obviously doesn’t have – a limitless future.  And while Payne teases us into siding with Mr. M in his passive aggressive attempts to undermine Tracy’s otherwise unchallenged bid for yet another piece of transcript padding, it is Tracy’s characterization that will ultimately prove to be most accurate: “Some people say I’m an overachiever, but I think they’re just jealous.”

“With pitiless clarity, [Election] dissects that most unlovely part of the male psyche – seething desire mixed with mean-minded envy – and the most unmentionable envy of all, the envy of the old for the young.  It is a nightmarish vision of the sexual-political arena, in which men and woman alike are cheapened and humiliated by their own paranoid self-regard.”

But before the opening narrations conclude,”there’s one more thing about Tracy I think you should know,” Mr. M reveals with a rather interesting choice of words.  “A few months before the election, she had gotten herself in a little trouble with my best friend, Dave Novotny,” whom Mr. M describes as “one of those guys who taught because they never wanted to leave high school in the first place.”  While working on yearbook together as teacher and student, Dave (“basically [a] good guy”) sweet-talked Tracy into a sordid relationship which ended with Dave (Mark Harelik) getting all “mushy” and being expelled from both teaching and his marriage.  Notably, Tracy’s reputation remained unscathed.  And as Mr. M unceremoniously throws out Tracy’s hard-earned pages of nomination sheets, his voice-overs become more revealing:

“I didn’t blame Tracy for what happened with Dave.  How could I?  Dave was an adult more than twice her age.  Sure, she got on my nerves once in a while, but I admired Tracy, I really did.”

Notwithstanding Tracy’s obvious fortitude and intelligence, Mr. M emphasizes her more duplicitous nature in deciding that Tracy needs to be taken down a notch.  And Payne wants us to be complicit (e.g., accompanying Mr. M’s commentary with rather unflattering freeze-frames of Tracy).  Indeed, when Tracy inadvertently damages her own banner days before the election, she tears down Paul’s banners as well in a fit of frustration and rage.  And not only does Tracy dodge a bullet, she is smug about it.  But Election is less about Tracy’s shortcomings and more about Mr. M’s self-righteous, male ego-driven envy, and to the extent we viewers find ourselves rooting for Mr. M, our own schadenfreude.

That said, Mr. M is not the only narrator in Election motivated by envy.  Tracy is jealous of Paul, whose effortless supply of social and financial capital becomes a threat when he decides to join the election.

Tammy (Jessica Campbell) also joins the election against Paul, her own brother (“even though you’re adopted”), once he becomes the recipient of her ex-girlfriend’s affections.

But Paul is the only narrator who does not succumb to envy, and in keeping with Payne’s distinct sense of irony, casts the one winning vote for Tracy that ultimately makes the difference in the election, forces Mr. M’s hand, and seals his fate.

In the original epilogue to the film (truer to the Tom Perrotta’s source material), Tracy pays to visit Mr. M a year later at a car lot where he is working; they share a cathartic moment as she test drives a new car to her mother’s house, which sits modestly in the shadow of a big factory; and Mr. M even signs her yearbook (“Dear Tracy …”) as the shot fades to the closing credits.  Fortunately for us, however, Payne actually reassembled the impeccably cast lead actors a year later to reshoot the epilogue we have: the deposed Mr. M  crosses paths with the ever-climbing Tracy in Washington, D.C. – an ending that drives home the Lewinskian-with-a-twist characterizations, exposes the self-denial and hypocrisy of Mr. M’s inner dialogue, and highlights the very nature of Mr. M’s mortal sin.

Expressing an appreciation (or lack thereof) for all sorts of films for over 25 years.
Previous: The Drop (2014)
Next: The Seven Deadly Sins in Cinema: Aguirre, The Wrath of God (1972)