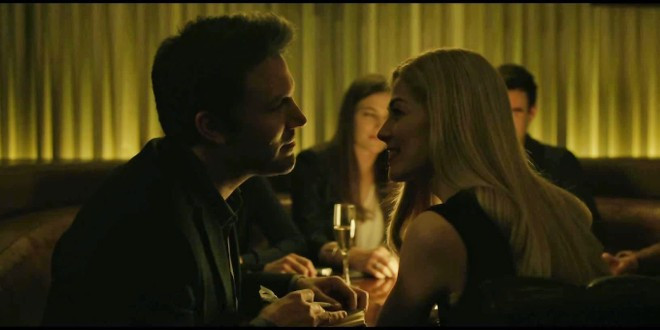 Posted by: Steven on October 11, 2014 in Movie Reviews Leave a comment

After any unnecessary remake, an above-average biopic, and an adaptation of a half-baked short story, it’s damn good to see director David Fincher back on his game – or I should say, The Game (1997), because that’s Gone Girl‘s closest touchstone to any of his other films.  That said, Gone Girl works much better as exercises in role-playing go, and the difference is Gillian Flynn – the screenwriter adapting her own best-selling novel.  Together, they craft pulp fiction of the highest order.

On the cusp of their fifth anniversary, Nick (Ben Affleck) receives a call form a neighbor and makes his way home only to find his wife, Amy (Rosamund Pike), conspicuously missing amid what looks to be a crime scene.  Based on the law of averages, the police immediately look to Nick, whose tendency to smile at the most inopportune moments doesn’t help his case.  Amy’s parents, who fictionalized and capitalized on her childhood with a series of successful books, quickly arrive on the scene to stir up “support.”  Clues are left behind – some of which are actually labeled as such.  Old boyfriends lurk about.  Everybody wants to know: Where is Amy?  And those are just the highlights of the first act.  Suffice to say, not all was well in Amy and Nick’s suburban McMansion.

Despite Gone Girl‘s obvious leanings toward daylight noir (a genre where one would normally expect deception and manipulation to be a form of currency), the serious, sniffy backlash by certain critics was inevitable.  That is, painting the proverbial Assertive Intelligent Woman in any less-than-flattering light tends to generate claims of misogyny and attacks on feminism (although passing the Bechdel Test should count for something, right?)  In this case, however, it would be relatively easy – if one were so inclined, that is – to view Amy as an extreme in terms of characterization (notwithstanding the pitch-perfect, nuanced performance by Pike) and Nick as exhibiting a more common and relatable brand of douchebaggery.  And in this sense, one could argue – again, if one were so inclined – that Gone Girl is not so much a cautionary tale besmirching said Assertive Intelligent Woman as it is a comeuppance for a much broader and more tangible class of male.

One could also take issue with Fincher/Flynn’s choice to pepper the narrative with on-the-nose satirical cracks at the modern press.  The multiple appearances of a Nancy Grace lookalike (Missy Pyle) is particularly low-hanging fruit.  That said, on balance, the ways that Fincher/Flynn portray the mainstream media – spinning and speculating reality into simple tales of villains and victims – also ring true, as do the ways they portray the consumers buying what they’re selling.  (For an example of life imitating art imitating life, see #TeamAmy and #TeamNick.)

But more than a genre exercise, more than a source of debate for gender politics, and more than a social satire, Gone Girl is a dark and darkly comic reflection of how a men and women sell themselves – and sell themselves out – in relationships and marriage.  In the early flashbacks to their courtship, Fincher/Flynn make sure that we witness Amy and Nick trading that cracking dialogue and sharing that iconic first kiss, akin to all those classic Hollywood romantic comedies of the 30s, 40s, and 50s.  That initial dance is so cute, warm, and validating; but to a greater or lesser extent, it is also the beginning of an extended performance to shield our lover from our real desires and insecurities – a futile attempt to lock out disappointment that only locks us into a profound sense of loneliness.  It is in dealing with those difficult, but recognizable, truths that Gone Girl is most likely to strike the deepest chord with its audience.

Expressing an appreciation (or lack thereof) for all sorts of films for over 25 years.
Previous: The Seven Deadly Sins in Cinema: Blue (1993)
Next: Interstellar (2014)