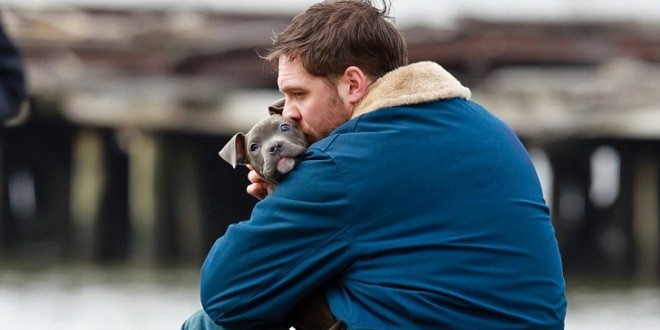 Posted by: Steven on September 14, 2014 in Movie Reviews Leave a comment

Sometimes we cannot save ourselves.  We are not worthy of confession, communion, or redemption.  And perhaps the best we can muster from the core of our remaining humanity is to save an abused puppy left in a garbage can for dead.

Well, that seems to be the emotional setup for this film that was originally titled “Animal Rescue”; but at its own core, The Drop is a small crime thriller (with a small “c” and small “t”) – part of a long line that runs back to Mean Streets (1973) – built around the dangerous opportunities at play in a neighborhood’s rotating “drop bars” (busy locations where the mob can inconspicuously deposit cash from its late-night activities).  While director Mickaël Roskam has a distinct affinity for profile shots and slowly bringing characters into focus, the overall production (especially the score) is pretty standard for the genre (read: unremarkable).  And while battling that been-there-done-that feeling throughout the first half of the film, certain viewers caught up in the tone might also find themselves haunted by the unsavory anticipation of a really cute puppy’s demise.  To put it simply, The Drop is not particularly inviting for deep engagement.  Yet some of the writing and the performances may indeed be worth the effort and patience.

The Drop is being sold as the latest and last work by writer Dennis Lehane (Mystic River (2003), Gone Baby Gone (2007)) and actor James Gandolfini (The Sopranos (1999-2007)), respectively; but this crime thriller is a distinctly international affair – reuniting the Belgian director with actor Matthias Schoenaerts (Bullhead (2012)) and starring Tom Hardy (The Dark Knight Rises (2012)) and Noomi Rapace (The Girl With the Dragon Tattoo (2010)).  Gandolfini is just about perfect as Marv, the bar manager harboring a decade of bitterness following a failed attempt to become a Tony Soprano – a supporting role that is as apropos as any for his swan song.  Schoenaerts, barely recognizable since his take on a street-fighter in Rust and Bone (2012), relies on a purely unsettling vibe as one of the most authentically unhinged and hateable antagonists in any film this year.  And Rapace is reliably strong as the not-quite love interest.

But Hardy’s take as Bob is the linchpin to the success or failure of the film.  As the only trusted employee of the semi-legitimate business, Bob must navigate the noir-y machinations at play in the Brooklyn nooks.  As Lehane holds his narrative cards close to the chest, Hardy adds his own elements of subtle elusiveness to this put-upon, average joe who is desperately trying not to rock any boats.  Is he a complete idiot or just a bit naive?  Just how close is he to his cousin Marv?  Whether Hardy is able to sell the sort of ending we have come to expect from a Lehane adaptation is up for debate.  I am going with yes.  Or maybe.  But mostly yes.