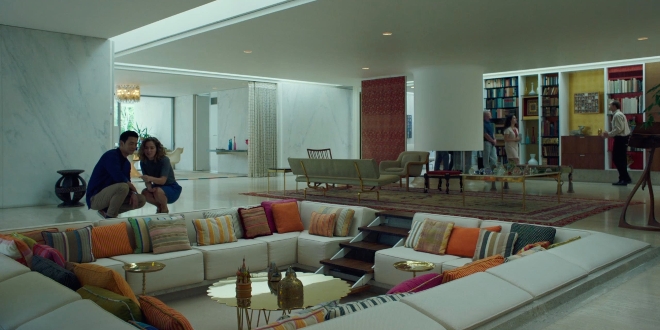 Posted by: Steven on January 14, 2018 in Other Stuff Leave a comment

10. Columbus.  As with the Indiana town for which it is named, architecture features prominently in academic-turned-filmmaker Kogonada’s debut feature.  And the best that I can say, upon viewing this film, is that there also seems to be a certain geometric connection between the influences at play: (i) it makes total sense, narratively speaking, that Kogonada previously made a video essay about Richard Linklater (writer and director of Before Sunrise (1995)); (ii) it makes total sense, philosophically speaking, that cinephile Linklater would rank Yasujiro’s Tokyo Story (1953) among his top five Criterion Collection releases; and as such, (iii) it makes total sense that, visually speaking, Kogonada would make a film so indebted to Ozu’s eye.  If any of this sounds intriguing, then Columbus is essential viewing.

9. Thelma.  Almost two decades past the distinctly post-modern ’90s, it seems like cinephiles have settled in with recognizing the artistic value of revisiting, remaking, or reimagining specific cinematic and non-cinematic narratives, and perhaps, that all stories worth telling have essentially already been told.  Along the way, I have fought and kicked and screamed against this trend.  But I suppose it’s time to include me in that group that have come to accept that perhaps cynical, and perhaps over-reaching, characterization.  In the case of Thelma, which was co-written and directed by Joachim Trier (no relation to Lars) and co-written by Eskil Vogt (Oslo, August 31st (2012)), the touchstone is clearly Stephen King’s Carrie – a novel that has been directly adapted for the big and small screens three times over the course of 40 years.  But here, the emerging sexuality and sexual politics are more resonant; the religious and parental issues are more complicated; and the psychic power of its post-pubescent protagonist is more inexplicable (and thus, more unsettling).  If there was one film released in 2017 that I just couldn’t get out of my head, it was Thelma.

8. My Cousin Rachel.  This years’ top 10 list includes two gothic romances, and as such, two films that sat at the number two or three slots, in terms of my prioritizing visits to the cinema, for several weekends running.  I mean, what does it mean to be “gothic” anyway?  And more importantly, why should I care about it (much less the literary and cinematic plays upon it)?  My initial appreciation for My Cousin Rachel stemmed from the sublime performance by Rachel Weisz, eclipsing the Golden Globe-winning Olivia de Havilland in what is, for my money, the best cast role of 2017; but my ultimate, and admittedly more subjective, appreciation for this adaptation can be attributed to the Criterion Collection, and specifically, a rather workaday documentary about the author of the original novel (Daphne du Maurier: In the Footsteps of “Rebecca,” which is included in its recent release of Rebecca (1940)).  I like to think that I strive to view films in a vacuum, for the self-contained pieces of popular art that they are; but my fascination with the title character – who became even more elusive to me upon rewatch, as I came to care less about the central intrigue surrounding her – was piqued by learning more about the author of the source material and the context in which it was written.  And with that, I will say no more.

7. The Killing of a Sacred Deer.  With his second English-language film following the sociological satire of The Lobster (2016), it is clear that writer/director Yorgos Lanthimos’ sits squarely in my wheelhouse.  And surprisingly enough perhaps, it is Colin Farrell who has emerged to exemplify the Lanthimos’ distinct approach to dialogue: almost theatrically banal, punctuated by abrupt little tears at the seams of social convention.  To be sure, Lanthimos is not for everyone.  But from the perspective of one drawn in by his mischievous modus operandi, toward the end of the film, I found myself oddly unmoved by what would otherwise be a rather shocking proposal made by Nicole Kidman’s character – a sign that Lanthimos had relieved me of the distraction of knee-jerk emotional response and moved me into a more philosophical headspace.  And that shift proves to be apropos, because although The Killing of a Sacred Deer often looks and sounds like a horror film, it ultimately proves to be a rather provocative exploration of our conflicting notions of justice.

6. Phantom Thread.  I will predict that, when asked to name the ultimate love story released in cinemas in 2017, the diehard cinephiles will be divided into two groups: the larger, teary-eyed set will emphatically claim Call Me By Your Name for that designation; and the rest of us will bestow that title upon Phantom Thread.

5. Brigsby Bear.  In my book, director Dave McCary, co-writer/actor Kyle Mooney, and co-writer Kevin Costello (former SNL alums who originally met in grade school) join fellow Millennials, the Duffer Brothers (Stranger Things), as the emerging artists of nostalgia.  The key is to create something that feels distinct from the connective tissue of our collective cultural past (in this instance, children’s TV programming from the ’80s and ’90s).  While treading no new emotional ground, McCary and company manage to generate a surprising degree of warmth from a rather dark place.  And while Brigsby Bear may just be the most rewatchable film on this list, it’s no guilty pleasure.

4. The Big Sick.  I seem to harbor a curious penchant for dramedies involving sick boys and girls (50/50 (2011), Me and Earl and the Dying Girl (2015)).  In the case of The Big Sick, much has been made of the real life story of co-screenwriters/spouses Emily Gordon and Kumail Nanjiani, who have been represented as the ultimate creative forces behind this Michael Showalter directed/Judd Apatow produced movie.  Much has been made of the Pakistani-American perspective of this film’s main character (Nanjiani), but even so, one look at the promotional poster might prompt the prospective viewer to ask “How could this possibly earn an 86 metascore?”  The answer: a tightly crafted script and a cast that brings the charm, from top to bottom.  I would argue that the mass appeal stems from the fact that, while there is no shortage of contemporary entertainers who have made an art of ingratiating themselves into the public consciousness, there is relatively little old school charm up there on the big screen these days.

3. Get Out.  Simply put, Get Out is a well-written, well-performed, and well-shot horror film.  The unfortunate – and yet predictable – aspect of much of the adulation for comedian/actor/screenwriter Jordan Peele’s directorial debut is the lack of self-awareness among so many of the adulating white Americans.  Get Out is more than an exercise in a familiar genre, as experienced through the unfamiliar viewpoint of a black American male.  Rather, in characterizing the film’s white antagonists in “post-racial America,” Peele draws not from the low-hanging fruit of Trump’s deplorables, but from the self-righteous hypocrisy of liberal elites (i.e., the audience most prone to patting themselves on the back for having an empathetic cinematic experience); and in devising the film’s denouement, Peele utilizes a recognizable trope to parallel a rather disturbing socio-psychological byproduct of identity politics (see A (Self-Conscious, Self-Righteous) Appreciation of Get Out (2017)).  Suffice it to say, for as much critical acclaim as Get Out has garnered, it’s a film that should’ve sparked a much deeper discussion than it has.

2. Lady MacBeth.  The title of this most recent “adaptation” Nikolai Leskov’s 1865 novella (Lady MacBeth of the Mtsensk District) intimates that if Lady MacBeth had a backstory (non-literally speaking), one could imagine that it wouldn’t be very pretty.  Unfortunately, the reductivist clarion call of the day is for more female directors (because, you know, directors are the only auteurs that really matter and what we really need in the world are more movies like the upcoming CGI-fest A Wrinkle in Time).  And as a result, this austere arthouse gem – playwright Alice Birch’s first foray into screenwriting for a feature film – fell under the radar of many who might very well appreciate it the most (because, you know, white male William Oldroyd directed it).  That said, I use the word “might” because, although some people say they want to see more “complex” women on screen, judging from some of the reactions to Lady MacBeth, what they really want are characters who service a particular socio-political ideology.  But for those who feel like a movie needs an agenda like a fish needs a bicycle, Birch, Oldroyd, and actress Florence Pugh offer this potent and painterly portrayal of Madame Bovary as psychodrama.

1. A Ghost Story.  Whether intended as praise or snark, a good deal of the social media commentary on writer/director David Lowery’s A Ghost Story has been reduced to a single meme involving the five-minute shot of Rooney Mara eating a whole pie (leaving many to speculate on how many takes were actually involved).  To anyone predisposed to avoid this film based solely upon this kind of buzz, I would recommend that you go with your gut.  This particular ghost story demands a viewer’s attention and is less than ideal for streaming (while checking a mobile device, getting up for a snack, taking a restroom break, etc.)  But for the attentive audience, Lowery’s voyeuristic song of impermanence and grief casts a precarious but effective spell … for more spoilery love, see My Favorite Film of 2017: A Ghost Story.

Honorable mentions (other B+ films, among the 98 2017 U.S. releases that I saw before compiling this list, that didn’t quite make the cut): Blade Runner 2049, Call Me by Your Name, Lady Bird, Split, The Square, Star Wars: The Last Jedi.

Expressing an appreciation (or lack thereof) for all sorts of films for over 25 years.
Previous: She Said: Top 10 Films of 2017
Next: Revenge (2018): Coralie Fargeat’s Day of the Woman

A (Self-Conscious, Self-Righteous) Appreciation of Get Out (2017)