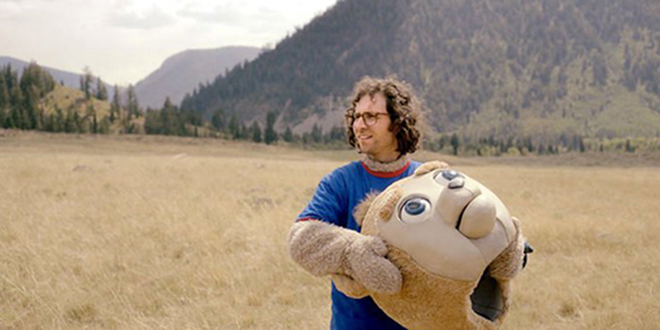 Posted by: Stacey on January 14, 2018 in Other Stuff Leave a comment

10. Brigsby Bear.  Written by and starring Kyle Mooney, of Saturday Night Live, Brigsby Bear is the most unusual film I saw this year.  It opens in the home of James, who is too old to have the bedroom shown outfitted with costumed-bear merchandise.  After a scene involving gas masks suggests the setting is a post-apocalyptic dystopia, Occam’s razor comes home to roost with a simpler explanation: James has been kidnapped, brainwashed, and entertained with a fake TV show only he has ever seen. What springs from this set-up is an honest exploration of how difficult it might be to reintegrate into your rightful family, when your kidnappers have irreparably impacted who you are.

9. Lady Bird. Christine McPherson (self-named “Lady Bird”) declares that the learning part of high school is over just as she embarks on a series of late-teen rites of passage: falling in love, losing her virginity, applying to colleges, and trying to figure out who she’s going to be.  But Greta Gerwig infuses this conventional coming-of-age plot, set her in hometown of Sacramento in the era she herself came of age, with believable dialogue, alternative music from the early aughts, and offbeat humor. Saoirse Ronan is earnest and angsty in the lead role, hitting all the right emotional notes for me.

8. Hounds of Love. This almost unwatchably brutal film made my top 10 due to its lasting emotional impact and the fascinating case study of the main characters’ dysfunctional relationship.  John and Evelyn are serial kidnappers of teenage girls, who they keep chained to a bed in their home. That director Ben Young utilizes elliptical storytelling to keep most of the brutality off screen makes it no easier to watch.  After the kidnapping sequence, the plot delves into the mundanity of John and Evelyn’s relationship dynamic.  Emma Booth (Evelyn) deftly wobbles between cold-blooded sycophantic wife and faint glimmer of redemption, landing like a spinning top at the merciful end.

7. Split.  An M. Night Shyamalan movie?  Released in January?  Starring a character with Multiple Personality Disorder?  It could have been bad, but it wasn’t.  James McAvoy stars as Kevin, a man with 24 “alters,” one of whom has kidnapped three teenage girls. Anya Taylor-Joy is the intelligent misfit, Casey, whose painful past is exposed in carefully paced flashbacks, coming full-circle at the film’s climax. The dynamic energy of this film, as Taylor-Joy tries to outsmart each of McAvoy’s skillfully executed “alters” is thrilling to the end.

6. Lady MacBeth. If I could go back and tell myself one thing in that window between watching the trailer for Lady MacBeth and seeing the actual movie, I think it I would quote Luke Skywalker from The Last Jedi, “This is not going to go the way you think.”  Every frame of this film, in its use of color and composition, looks like a moving painting.  But it has a plot shaped like a mudslide.  Florence Pugh emerges, from the stark vacuum where you’d expect a protagonist, to deliver a character arc similar to that of Walter White.  Feminism need not always be didactic.

5. The Killing of a Sacred Deer.  If The Lobster (2016) was a reflection on the peculiarities of dating taken to an absurd extreme, The Killing of a Sacred Deer is a reflection on the nature of guilt and atonement taken to a supernatural extreme.  As with every Lanthimos movie I’ve seen, this is not for everyone.  Themes of illness, death, and violent retribution are delivered with deadpan dialogue and sterile, if well composed, shots.   One of the characters posits that nothing short of an equivalent sacrifice can fully assuage the guilt of having deeply wronged someone. I’ve pondered this uneasily ever since.

4. Phantom Thread.  Every relationship is a negotiation between two people in which they get to decide what works for them, conventional or not.  Phantom Thread, a film as meticulously crafted as Daniel Day Lewis’s character’s dresses, takes this concept to an absurd extreme.  It would be easy to call this film cynical, but I’m not sure I see it that way.  Daniel Day Lewis’s character possesses an awareness of his particular neuroses and ultimately seeks to have them tamped down so that he and Alma, his wife, can get what they need from each other.  Granted, the method employed is Lanthimos-level absurd.  I sat through two hours of this film unsure what to make of it.  Then I fell in love with it in the last ten minutes.

3. Call Me By Your Name.  From the very first time I saw the trailer for this film, having never heard of it or read the book, I was mesmerized. Italy, bike rides, intellectual discourse, desire  – that song (the only earworm in recent memory that I didn’t mind).  And everything that came after – the book and the movie – continued to mesmerize. The love story of Oliver and Elio resonates as a foundational relationship that changes a person, that enables a person to know himself in a way he couldn’t have otherwise.  I love the respect this relationship is given, despite Elio’s young age – it can be tempting to dismiss young love as immature, when it can actually be life altering and formative.  And Timotheé Chalamet (Elio) did a better job of not crying at the end than I did.

2. The Big Sick.  This “almost true” re-telling of the love story between a second generation Pakistani-American, Kumail Nanjiani, and his wife Emily V. Gordon combines serious-as-a-heart-attack drama with clever, fresh humor, the mixed tones complementing each other to an emotionally satisfying end.  Nanjiani’s humor ranges from light-as-a-feather poop scenarios to an edgier 9/11 gambit that pays off as possibly the best film joke of the year.  He’s heard every Muslim slur and he’s going to use humor to expose ignorance, Sacha Baron-Cohen style.  The heart of the movie is Kumail’s experience of Emily’s illness, a stretch in which Holly Hunter and Ray Romano shine as Emily’s parents.  The script deftly avoids saccharine cliché while delivering smiles and tears to the end.

1. The Shape of Water. Guillermo Del Toro’s latest film taps into the transcendent aspect of love: the ability to look past superficial trappings and really see another person.  Elisa (Sally Hawkins) is a diminutive mute woman who masturbates in her bathtub each morning as her coffee brews before reporting to her job as a housekeeper.  The lab she cleans with her friend Zelda (Octavia Spencer) houses “the asset”, a blue-green, scale-clad aquatic humanoid.  Neither can speak, but both can hear and they bond over music and eggs.  Just as they begin to fall in love, Elisa learns that the asset’s life is at stake.  This leads to a remarkable scene in which she delivers a deeply impassioned and entirely silent plea for help to save her love.

I'm no film buff like Steven. My favorite movies before meeting Steven (which would reflect my taste independent of his influence) were Memento, The Game, Young Frankenstein, and the Princess Bride. The best movies I've discovered since meeting him include Mulholland Drive, Eternal Sunshine of the Spotless Mind, Synecdoche NY, A Serious Man, Inception, Black Swan, Melancholia, and many more that I'm not thinking of right now...
Previous: My Favorite Film of 2017: A Ghost Story
Next: He Said: Top 10 Films of 2017