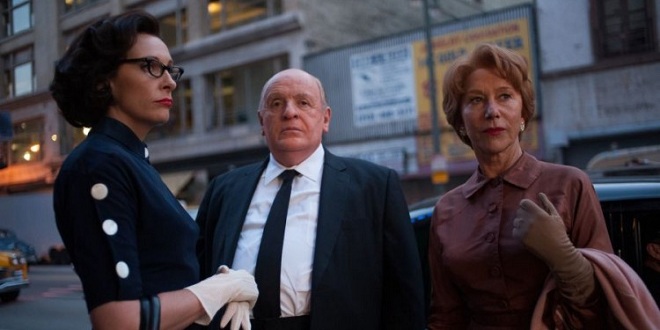 Posted by: Steven on December 9, 2012 in Movie Reviews Leave a comment

Biopics are dramatizations of real life figures, not documentaries.  Understanding the artistic opportunities offered by the biopic, some of the best fillmmakers take chances by trying to capture the truth behind the character (e.g., Confessions of a Dangerous Mind (2002)).  But moviegoers tend to be unforgiving when a biopic strays too far from the more conventional “just the facts” approach.  Within this context, the task undertaken by director Sacha Gervasi – transitioning from  his first documentary (Anvil! The Story of Anvil (2009)) to making his first biopic – was probably quite daunting.  After all, Gervasi is treading on sacred ground – the making of one of the most culturally significant films of all time (Psycho (1960)) by one of the greatest filmmakers of all time (Alfred Hitchcock played by Anthony Hopkins).  In light of the uniquely disturbing nature of that film and the personal sacrifice involved to get it made, the subject matter is certainly fertile ground for at least one truly engrossing biopic.  Unfortunately, Hitchcock is not that biopic.

In this case, the screenplay by John McLaughlin (Black Swan (2010)) strays from its source material (Stephen Rebello’s Alfred Hitchcock and the Making of Psycho (1990)), focusing only tangentially on the production of Psycho.  Of course, no film about Psycho would be complete without addressing Hitchcock’s seemingly unhealthy obsessions for blondes and violence.  (Some of the best scenes in the film connect Hitchcock in imaginary dialogue with the real life inspiration of Robert Bloch’s original novel – serial killer Ed Gein (Michael Wincott).)  But Gervasi and Laughlin only flirt with Hitchcock’s psychology, using these aspects not to produce a fascinating character study but to service a story we have all heard many times before:  behind every great man is an unsung hero of a woman (Hitchcock’s wife, Alma Reville, played by Helen Mirren).  And by the time we get to the premiere of Psycho at the end of the film, the dialogue between Hitchcock and Reville is so thick that you could spread it on a cracker.

All that said, Hitchcock is still a good bit of fun due in large part to the performances.  Although widely criticized for his approach in Nixon (1995), Hopkins wisely chooses not to go for the spot-on imitation (as is the tendency in most biopics), but instead seems to channelthe character in a way that plays more natural and honest.  The actors-playing-actors also seem to follow suit, including Scarlett Johansson as Janet Leigh, James D’ Arcy as Anthony Perkins, and Jessica Biel as Vera Miles.  And the competent cast is round out by Toni Collette as Hitchcock’s assistant, Mark Stuhlbarg as Hitchcock’s agent, and Ralph Macchio as Hitchcock’s screenwriter – all of whom you will wish had more screen time in this film that tends to reach for breadth rather than depth.

Expressing an appreciation (or lack thereof) for all sorts of films for over 25 years.
Previous: Killing Them Softly (2012)
Next: Les Misérables (2012)