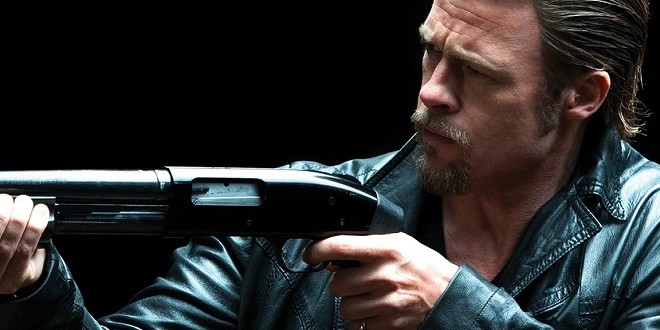 Posted by: Steven on December 1, 2012 in Movie Reviews 2 Comments

From the very first shot to the very last line of Killing Them Softly, writer/director Andrew Dominik (The Assassination of Jesse James by the Coward Robert Ford (2007)) paints a very bleak picture of the United States of America.  “Bleak” might be too weak a word.  “Cynicism” might be a bit more specific.  But let’s face it, cynicism without satire can be a real downer.

In a plot setup that sounds like it was plucked right from a 1950s b-noir, elder ex-con Johnny (Vincent Curatola) hatches a scheme where a younger ex-con Frankie (Scoot McNairy) and his junkie friend Russell (Ben Mendelsohn) will hold up a big card game.  Of course, we are not talking about any card game, but the one sponsored by Markie (Ray Liotta), who is widely believed to have gotten away with holding up his own card game several years earlier.  (Apparently, even the mob adheres to a statute of limitations.)  But the robbery ends up dampening all of the card games in the area, and hitman Jackie (Brad Pitt) and an unnamed lawyer (Richard Jenkins) are dispatched by the unseen powers that be to solve the problem.  Bad things happen.

After seeing director Peter Yates’ adaptation of George V. Higgins’ novel, The Friends of Eddie Coyle (1973), writer/director Andrew Dominik (The Assassination of Jesse James by the Coward Robert Ford (2007)) sought out Higgins’ other books and ultimately decided to adapt his 1974 novel, Coogan’s Trade.  According to Dominik, the attraction to the story was its setting within an economic collapse, which prompted him to re-set the film in the U.S. in the midst of the Fall of 2008.

In this aspect, Dominik is not going for subtlety.   (It seems unlikely that a room full of gambling heavies would be tuned into George Bush reassuring a nation on the verge of financial collapse.)  And within this context, Pitt and Jenkins play the middle management.  Pitt’s Jackie is the connection with the blue collar criminals, while Jenkins’ lawyer reluctantly hands down orders from the top brass.  They are more concerned with restoring consumer confidence than pursuing justice.  And in the same way that nobody wants to fire anybody, they go through great pains to delegate the dirty work until it is no longer possible.  Together, they represent the banality of capitalism.

But the allegorical connection between organized crime and corporate America is far too simplistic to be truly compelling.  Specifically, the film comes across as one big indictment of the male gender.  By my count, there is only one female character granted a few lines of dialogue who is, not coincidentally, a hooker.

That said, in a world where there are no protagonists, anybody could live or die.  Stakes are higher.  Expectations could be shattered.  And in this respect,  Dominik’s approach to visual storytelling alone may be worth the price of admission.

In the grand scheme of things, Killing Them Softly is one of those films that falls within a class that could best be described as “post-Tarantino.”  That is, if writer/director Quentin Tarantino opened the door to I-can’t-believe-they-are-talking-about-that dialogue casually mixed with a healthy helping of violence, then Dominik has not only walked through that door, but has plopped down on the couch and propped his feet up on the coffee table.  Textually, the difference (the “post-” part, if you will) is that while Reservoir Dogs (1992) and Pulp Fiction (1994) were populated with henchmen dressed up in uniform suits, Dominik’s view of the criminal underworld is not only de-romanticized, but just downright depressing.  Eschewing the typical conventions of a crime thriller, Dominik sacrifices an efficient plot for a stronger sense of theme and tone.  (For example, there is simply no pragmatic reason to introduce a character like James Gandolfini’s Mickey, but one would be hard pressed not to appreciate the peformance.)

Despite the expectations for a film with this particular subject matter, there may be more to the film’s title than a reference to a line uttered by Jackie.  Dominik is able to sustain a high level of tension without ever letting the viewer take the violence for granted.  For a 97-minute film, there are relatively few scenes of carnage.  And even the most disturbing sequence (involving a beating) relies more upon sound design than visuals.

At very least, all of this adds up to an experience where the viewer never really knows where the film is going, which is no small feat within such an overdone genre.

Expressing an appreciation (or lack thereof) for all sorts of films for over 25 years.
Previous: My 10 Most Anticipated Films of 2013
Next: Hitchcock (2012)