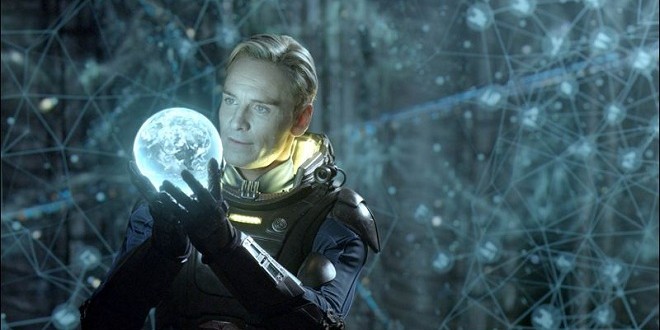 1979. In the universe of science fiction films, nobody planned on sequels. And in 2012, franchising seems to be the agenda for every big-budget movie. But more on that later.

I went through great pains to avoid any spoilers – a testament to how much I anticipated Prometheus, director Ridley Scott’s return to the universe of his breakthrough film, Alien (1979). And there is plenty to like. This big film is visually convincing. Everything that I cannot tolerate in the vast majority of action/sci-fi films circa 2012 (mostly the cartoonish CGI) is refreshingly missing. I could feel the forces of gravity at work when two big objects collide. All the money that the studios threw at Scott to do his first sci-fi film since Blade Runner (1982) is certainly up there on that screen.

In the context of the setup (a journey into deep space to search for humankind’s interstellar “engineers”), I also appreciated the basic philosophical premise – i.e., the evolutionists and the creationists are both right and wrong. Set in 2093, Archeologist Elisabeth Shaw (actually referred to as “Lisbeth” at one point in the film, in what must surely be a reference to Noomi Rapace’s signature role in The Girl with the Dragon Tattoo (2009)) learns the hard way that scientific discovery never leads to the Big Answers so much as it inevitably poses more questions. Yet in a sci-fi film that seems to be striving to marry the confined horror of Alien with the philosophical undertones of Blade Runner, the script never seems to effectively immerse the viewer very deeply in any of these thought-provoking issues.

To be sure, I have to give Scott props for avoiding the obvious linear connections of the typical prequel. (Anybody going into this film expecting a tidy prequel like The Thing (2011) or Revenge of the Sith (2005) would be sorely disappointed.) That said, there are a number of narrative parallels with Alien to appreciate (e.g., searching the horror house of a dark derelict ship, the robot that you’re not sure you can trust, the decision to allow an infected crewmember back on the ship, the psychological horror of being infected with something alien, the lifeboat that proves to be not so safe).  The plot itself is deliciously ambiguous, which may be frustrating for some viewers.

What is missing from Scott’s previous genre entries is the subtle dialogue.  Conspicuously absent are the everyman “truckers in space” characterizations in Alien, who at the beginning of that film awaken from hyper-sleep to bitch about who is getting a bonus and trade jokes across while barely enjoying a meal in the employee lounge.  Even with respect to the headier Blade Runner, I always preferred the version without the narration, and I found the philosophical discussion between Batty (Rutger Hauer) and Deckard (Harrison Ford) to be elegantly sparse. Yet that elegance is certainly missing from thePrometheus script by Jon Spaihts and Damon Lindelof.  The pages are just dripping with gooey exposition, and appropriately (or inappropriately) enough, Michael Fassbender as David the android makes the best of it. Still, I have to ask – has the population of movie viewers been so affected by dysgenics since 1982 that we have to spoonfed all this stuff?

Even if I could forgive the clunky dialogue, I also have to penalize Prometheus for its shameless ending. In my opinion, instead of an on-the-nose money shot followed by a sequel setup, Scott could and should have ended this film on the same ambiguous terms as the film for which it “shares a common DNA” (as Scott himself puts it).

Prometheus is no Alien and no Blade Runner.  But then again, this is not 1979 or 1982. Overall, the film is an entertaining, visually-stunning exercise in the commercial art of mildly leaning on a steady franchise while inventing a new one.

Expressing an appreciation (or lack thereof) for all sorts of films for over 25 years.
Previous: The Girl With the Dragon Tattoo: Fincher’s Remake v. The Swedish Original
Next: Christopher Nolan’s Dark Knight Trilogy