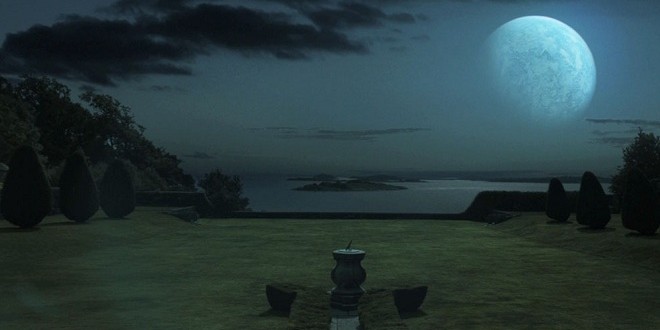 Posted by: Steven on November 21, 2011 in Film Essays Leave a comment

Woody Allen once said, “Paranoia is knowing all the facts.”  Substitute the word “paranoia” with the word “depression,” and you have the thematic backbone of Lars von Trier’s new film, Melancholia (2011).

The first half – titled “Part I – Justine” – covers the wedding reception of the melancholic character (Kirsten Dunst) at the opulent estate of her sister, Claire (Charolotte Gainsbourg) and brother-in-law, John (Keifer Sutherland).  It is the rogues gallery of characters attending the reception that define Justine as the closest thing to a protagonist in this film.  From his inarticulate toast to his new bride consisting of the most banal and generic of sentiments, it is apparent that her new husband Michael (Alexander Skarsgard) is as daft and carefree as Justine is intelligent and conscientious.  Justine’s boss (Stellan Skarsgard, Alexander’s real life father), comes across as a pathetically relentless capitalist, taking the opportunity granted in a wedding toast to promote Justine from copywriter to artistic director, obsessively hovering over Justine, and pimping out his own nephew out – all for the purpose of simply extracting a tag line.  John, who is hosting the event, simply wants everybody to appreciate how much time and money he has put into the event.  And Justine’s father (John Hurt), with whom Justine earnestly attempts to communicate, eventually succumbs to his own philandering impulses.  With all of these men in her life, it is no wonder that Justine feels so disengaged.

Claire and her young son, Leo (Cameron Spur), are the only characters that Justine is able to connect with on any emotional level.  And it is Claire, early on in the evening, who admonishes Justine not have an outburst.  No such outbursts occur, but the various phases of what in our culture should be the quintessential celebration in a woman’s life are punctuated by an increasingly disturbing series of distractions indulged in by Justine, who is trying desperately to keep it together.  After a two-hour delay in her arrival, Justine feels compelled to visit her favorite horse before joining the festivities.  She insists on putting her nephew to bed and falls asleep in the process.  She decides to take a bath while the guests await the cutting of the cake.  And the evening culminates in Justine abandoning her attractive (yet resolutely unsexy) husband on their wedding bed to hook up with a virtual stranger.  True to Lars von Trier form, the golf course that surrounds the estate – the source of pride to John and the symbol of evolved sensibility and success – ultimately becomes a receptacle for the basest of human activities (urination and ejaculation).

In this relatively adroit script by von Trier, somewhat reminiscent of The Celebration (1998), what is considered normal social behavior, often engaged in by well-meaning characters, becomes darkly absurd.  The rituals of celebration seem fundamentally wrong.  And within this backdrop, Justine’s mother, Gaby (Charlotte Rampling) serves as the Greek chorus, humorously (but uncomfortably) chiming in at various points with frank comments about the nature of love and marriage.

By the end of the night, Justine burns all her bridges, although the scenes feel more like an emancipation.  In spite of her deviant behavior, it is Justine who becomes the sympathetic character – an artist (of sorts) who grasps a certain reality at a level well beyond those around her.  And it is Justine who notices that a star that was present on the waning daylight prior to the reception has disappeared by the next morning, as has any hope that she will live a “normal” life.

The second half of the film – entitled “Part 2 – Claire” – appears to take place several months later.  We now know that the stars were being blocked by the presence of a planet that has been “hiding” behind the sun and is now bearing down upon the Earth.  Since the eponymous heavenly body itself is obviously a metaphor, von Trier is able to strip the plot of the normal trappings of doomsday movies (e.g., the attempt to create a plausible scenario by peppering the plot with news reports and scientists to inform the viewer).  In stark contrast to films of this subgenre, the movement of Melancholia over the final days is tracked on John and Claire’s insular estate by a relatively simple device designed by a child.

The point of view also shifts to Claire, who has offered to take care of the now barely-functioning Justine.  But Claire, who has pursued a normal life of marriage and having children, is the sister of Justine and the daughter of Gaby.  As such, she becomes the pivot point in a struggle between the realities that belie the light and the dark sides of the human pysche.

Of the influences in Claire life, her husband, John, portends to be the pragmatic optimist.  He admonishes her for trying to obtain more obtain information about Melancholia from the internet.  Early on, Claire tells Justine that John researches these sorts of things, and he reassures her that the scientific consensus is that Melancholia will simply pass by the Earth.  Initially, he revels in being able to share this once-in-a-lifetime opportunity with his child.  But behind Claire’s back, John is also stockpiling supplies.

As the probability of impending doom increases, Justine evolves from a state of catatonia to that of the Zen seer, who seems to “know things” at an almost metaphysical level.  As she sees it, we are alone in the universe, and that is okay.  She comes to literally bathe in the light of Melancholia.

In the midst of these competing influences, Claire’s son, Leo, becomes her ultimate motivation – an expression of the very human instinct to survive and protect one’s offspring.

However, the map that Claire prints from the internet reveals that the much larger planet appears to be chasing down the Earth.  (Indeed, the universe is trying to kill all of us, as Neil Degrasse Tyson reminds us.)  And when it becomes evident that there is no future, the successful, emotionally-healthy John (who would normally be the protagonist in a film of such subject matter) proves to be a hypocrite who succumbs to despair through the act of suicide – an act he hides with shame.  In contrast, Justine, who has come to embrace the truth, ultimately meets her mortality with a sense of profound serenity.  As the only character without fear, it is Justine who is able to provide the coping mechanism for Leo and Claire in the final moments.  In this fable, Justine is the hero.

Much has been said of the film’s prologue, which is musically set to Wagner’s Tristan und Isolde Prelude.  By beginning the film with a depiction of doomsday, von Trier creates a sense of inevitability that changes the perspective that we might otherwise have and allows us to relate to Justine.  The series of romanticized, almost-still images – which transition into the much larger Melancholia overcoming the Earth in a great collision – ultimately characterize the film as an unlikely ode to those who are afflicted with, and succumb to, that certain state of being that most would label as “depression.”  But von Trier prefers to characterize it with a much more elegant word; and not only does von Trier empathize with it, he validates it.

Expressing an appreciation (or lack thereof) for all sorts of films for over 25 years.
Next: Shame (2011)