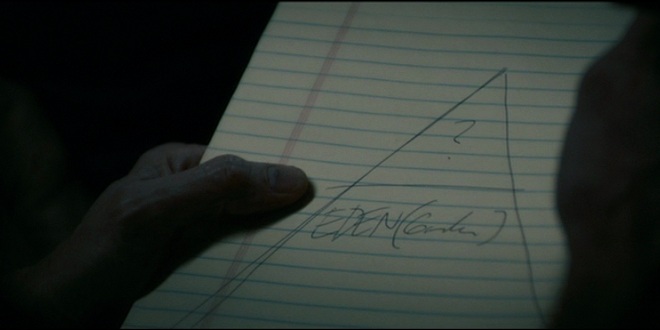 Posted by: Stacey on October 28, 2012 in Film Essays Leave a comment

Antichrist is a beautifully shot and deeply disturbing film in which “He” (Willem Dafoe) and “She” (Charlotte Gainsbourg) attempt to find what’s at the top of this triangle diagram: what She pathologically fears.

After their child jumps out a window to his death while the couple has sex, She goes into a paralyzing depression that her doctor diagnoses as an “atypical pattern of grief”. The well-meaning He (also a therapist) believes He can better help Her with a combination of talk therapy and Cognitive Behavioral Therapy*, so he takes over her care.

What She tells him she most fears is “Eden”, a remote woodsy area with a cabin where She spent the prior summer writing a thesis. He takes Her there, hoping that direct exposure to Eden with no resulting consequences will alleviate Her fear. The problem is that Eden isn’t actually Her fear. 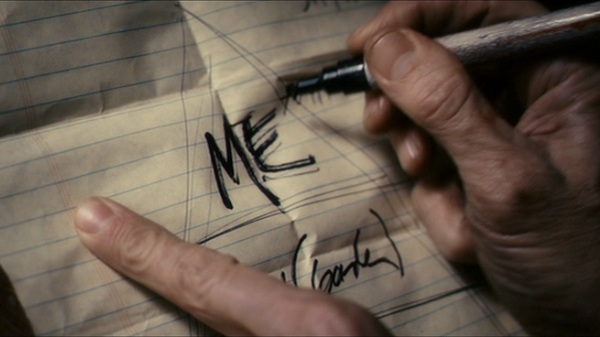 It takes Him awhile to discover this. He initially thinks She has a phobia of nature, which is logical as She says “nature is Satan’s church”, and this seems compatible with her fear of Eden where nature is everywhere. But He eventually realizes that what She really fears is Her own nature.

The research for Her thesis topic “Gynocide” focused on evil acts committed against women. During a role play session, He realizes that She had interpreted the writings as proof of the evil of women, including Herself. He says “You were supposed to be critical of those [ideas] – this is your thesis! Instead you’re embracing them!”

The film asks this question: to what extent do our beliefs or fears about ourselves affect our actual actions? And can they result in a self-fulfilling prophecy?

In this case, the answer is “yes”. The first symptom of her altered perspective is revealed in photographs showing that she repeatedly put her child’s shoes on the wrong feet during the summer they spent alone at the cabin as she was writing her thesis. We see in a flashback that this was no mistake – the child is crying with discomfort as she puts the shoes on. Later, it becomes obvious that She also believes She’s responsible for the child’s death.

During therapy, She repeatedly engages in what I can only describe as desperate sex with Him, always very suddenly and at inappropriate moments of grief. As time goes on, it becomes apparent that She feels not only grief, but also shame and an overwhelming fear that He will discover how evil and unworthy She is, and leave Her. The sex appears to temporarily assuage Her fears, assuring Her that He does still love Her.

Her fear reaches a climax when the report of a foot bone deformity on the child’s autopsy causes Him to notice the child’s shoes were put on the wrong feet in every picture from the summer they spent alone together. At this point, in Her mind, Her ultimate fear has been realized – He has discovered how truly evil and unworthy She is.

In this moment of shame and tension, she rips off her pants and jumps on top of him and begins to perform the most desperate sex of the entire movie. She’s crying as it happens, yelling “You’re leaving me, aren’t you! You’re leaving me, you bastard!”. He responds “I’m not leaving you, I’m helping you! I love you!” And She yells “I don’t believe you! I don’t believe you!”

At this point, convinced that He is going to leave Her, She knocks him out and literally affixes a heavy weight to his calf so that He can’t leave Her. When He’s able to drag himself outside and hide from Her, She frantically searches for Him yelling “How could you leave me? You bastard!” over and over.

Later, in a moment of contrition, She drags Him inside the cabin, but doesn’t remove the weight, lying that She can’t find the wrench needed to remove it. We saw Her throw it under the cabin earlier, so both we and She know where it is.

Next, in the ultimate act of shame and self-hatred, she mutilates her own genitals after a flashback reveals that She believes She watched her child jump to his death while She chose to continue her orgasm. Did this really happen? Her face isn’t in focus at that point in the original scene, so we don’t know. All we know is that She believes She is to blame.

He eventually finds the wrench and frees himself, immediately strangling her and fulfilling the prophecy.

Would any of this have happened if She hadn’t begun to deeply fear and even believe that She was an evil and unworthy person? That’s the question this movie asks.

Grade: A (but it’s too disturbing for me to be able to recommend it to anyone in good conscience)

* CBT is often used to treat phobias by directly exposing the patient to his or her fears (e.g. spiders), so that they can relearn a healthier response as nothing bad happens during the exposure.

I'm no film buff like Steven. My favorite movies before meeting Steven (which would reflect my taste independent of his influence) were Memento, The Game, Young Frankenstein, and the Princess Bride. The best movies I've discovered since meeting him include Mulholland Drive, Eternal Sunshine of the Spotless Mind, Synecdoche NY, A Serious Man, Inception, Black Swan, Melancholia, and many more that I'm not thinking of right now...
Previous: He Said: Antichrist (2009) as an Exercise in Gothic Horror – No More, No Less
Next: To Film Critics Who Love Books: Could I Just Get a Movie Review? … Probably Not, But I Had to Ask

He Said: Antichrist (2009) as an Exercise in Gothic Horror – No More, No Less