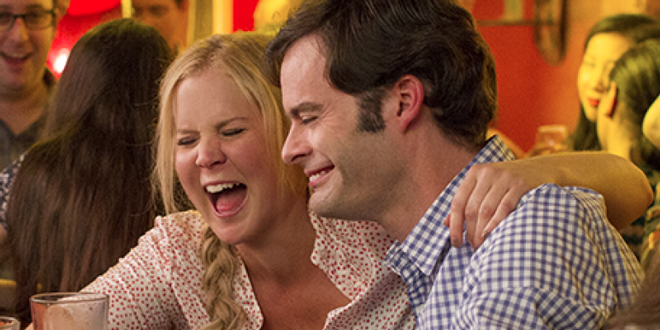 Posted by: Stacey on January 16, 2016 in Other Stuff Leave a comment

10. Trainwreck.  I can’t resist a good raunchy comedy, and this is the best of the year.  Amy Schumer strikes the perfect balance of emotionally troubled yet vulnerable, and Bill Hader is a surprisingly sexy leading man.  Schumer’s entire career is built on the shtick that she’s a train wreck, but I’m pretty sure she knows what she’s doing.  (I mean, she did cast Tilda Swinton as her boss).  Criticize the end if you will, but this is a fun ride.

9. Amy.  The footage in this documentary captures Amy Winehouse in such candid, unscripted moments that you feel you intimately know her by the end.  The film exposes her whole personality, re-humanizing her in the process, but without glossing over any of her struggles. Her goofiness, irreverence, effortless talent, addiction, and dysfunctional relationships are all evident and on display.

8. The Gift.  Joel Edgerton is one to watch.  He wrote, directed, and convincingly starred in this thriller that kept me on the edge of my seat until the end.  It’s a thoughtful film, in which it’s often hard to figure out who the protagonist and antagonist are.  The end left me wondering if planting a cruel seed of uncertainty is truly the best revenge.

7. Ex Machina.  Ex Machina taps into the awkward uncertainty of exactly how intelligent computers can become, how emotionally attached to them humans can be, and what might happen if one became self-aware.  With convincing CGI; fantastic acting by Oscar Isaac, Domhnall Gleeson, and Alicia Vikander; and suspenseful ambiguity to the final scene, this is one not to miss.

6. The Diary of a Teenage Girl.  When I think of this movie, the first thing that comes to mind is brilliant Bel Powley, who embodies the awkward, naive, sexually enthusiastic teenage star of the film (Minnie).  Minnie is an aspiring cartoon artist and her heartbreakingly earnest and poignant tale is interwoven with well-done animation.  A visual and emotional pleasure to watch.

5. Joy.  I think the true story of Joy Mangano resonates so much with me because her story is shared by so many of us who nurse – even obsess over – creative talents when we’re young only to get sucked into the daily grind of a 9 to 5 and never-ending housework.  My heart soared when she decided one day to pursue her dreams.  Although all didn’t immediately go as planned, Joy is a smart, tough girl who didn’t let anyone tell her who she is or isn’t.

4. Me and Earl and the Dying Girl.  This year’s version of The Fault in Our Stars is brilliantly funny, quirky, and heartbreaking.  I usually hate cancer movies, but the short parody films made by the main character and his BFF are worth the price of admission.  I admit to holding a bit of a grudge against the unreliable narrator, though.

3. The Big Short.  This movie was the surprise of the year for me. I didn’t expect a thorough examination of the housing bubble in the late aughts to be so engaging, funny, tragic, and uniquely told.  I was a bit spellbound watching it.  This film could double as an uncomfortably entertaining weekend flick or a classroom film.  I expect Margot Robbie explaining sub-prime mortgages in a bath tub would spice up most finance classes.

2. Room.  Room may be based on a novel, but it’s uncomfortably similar to the stories of Jaycee Dugard and the three girls kept by Ariel Castro in Cleveland.  Ma, played exquisitely by Brie Larson, was captured as a teenager, kept in a drab room, and raped repeatedly.  The film starts when the child of Ma and her captor is five years old – old enough for him to know the truth about the room in which they live. Due to the seemingly impenetrable security of Room, Ma and Jack take an unimaginable risk for the chance of freedom.  I’d love to say more about how the film handled the fallout of that risk, but that would be spoilery.

1. The Martian.  This is my #1 film of 2015 because I just plain enjoyed it more than any other movie. It’s hard for me to imagine a more hopeless situation than being left for dead on Mars.  Particularly without enough food to last until rescue would be possible.  But astronaut Mark Watney (Matt Damon) doesn’t lose his sense of humor, which keeps the film from taking itself too seriously. Watney does, however, use a combination of math, science, ingenuity, and brute force to survive as long as possible, and it’s a thrill watching him (as he says) “science the shit” out of things.  I laughed, I cried, I applauded. I walked out thinking it was the best movie of the year.

Movies that made my “favorite” list, but couldn’t honor because it’s maniacally important I only choose only ten:

Important correction from last year’s Top 10 post:  Last year I wrote a snarky review about the movie Wild, saying Cheryl Strayed is self-absorbed and solipsistic.  I was wrong.  I hadn’t read Wild at the time I wrote that, but I did shortly after, and found it very thoughtful and well-written.  Months passed and I didn’t read anything else she’d written until somehow (I wish I could remember how) I learned of her book Tiny Beautiful Things and decided to read it.  It’s a collection of the advice columns she wrote as Dear Sugar at The Rumpus.  In the book, Cheryl takes on the most complex and painfully human topics imaginable. Her responses are part memoir, part insight, part tough love; her compassion and empathy is without boundaries; and her writing has a stunning literary quality.  This book resonated with me deeply and quickly became one of my all-time favorites.  I will be reading it again.  So, I’d like to retract my snark from last year.  Cheryl Strayed is awesome.

Tagged with: Amy move Ex Machina movie Joy movie Me and Earl and the Dying Girl The Big Short movie The Diary of a Teenage Girl movie The Gift movie The Martian movie Trainwreck movie

I'm no film buff like Steven. My favorite movies before meeting Steven (which would reflect my taste independent of his influence) were Memento, The Game, Young Frankenstein, and the Princess Bride. The best movies I've discovered since meeting him include Mulholland Drive, Eternal Sunshine of the Spotless Mind, Synecdoche NY, A Serious Man, Inception, Black Swan, Melancholia, and many more that I'm not thinking of right now...
Previous: My Favorite Film of 2015: Ex Machina
Next: My Favorite Film of 2016: La La Land