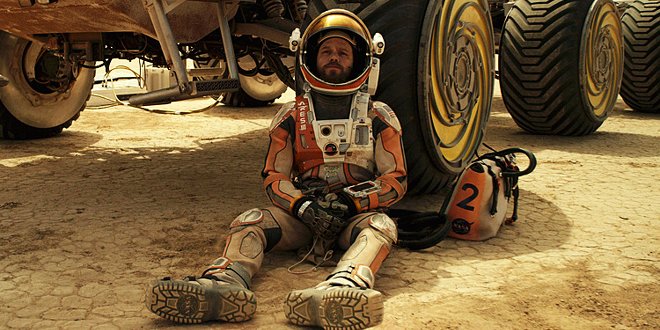 Posted by: Steven on October 3, 2015 in Movie Reviews Leave a comment

“It’s bigger than one person.”

Broadly speaking, The Martian may just be the best Disney movie of the last year.  By “Disney movie,” I don’t mean a film actually produced by Disney Studios (The Martian is brought to us courtesy of 20th Century Fox); rather, I mean those unapologetically optimistic – and yes, perhaps sentimental – odes to the human spirit, fueled by ingenuity, curiosity, and sheer determination.  From its trailer to its closing montage, The Martian certainly seems to fit the bill, notwithstanding all the critics characterizing it as a love letter to science.  (Andy Weir’s source novel was vetted online by a number of self-proclaimed science geeks prior to hitting the big time.)

But in contrast with films like Christopher Nolan’s overplotted Interstellar (2014) and Disney’s own overwrought Tomorrowland (2015), screenwriter Drew Goddard and director Ridley Scott all but avoid any thematic explication.  There are virtually no villains, no borders, and no agendas.  Weir’s tale is defined by the very process of individual and collective problem-solving: there is just one astronaut/botanist (Matt Damon), left behind on Mars, bringing all he has to bear to survive, and a whole world rallying to bring that one man home.  So whereas Nolan could not pass up the opportunity to take a jibe at climate-change deniers, the anti-science contingency that infects contemporary public policy is conspicuously absent from this decidedly science-y affair that imagines a future with an active, fully-funded NASA.  And unlike Tomorrowland, there is no multi-cultural hand-holding session tacked on to bring it all home.

Beyond its relatively modest narrative goals, part of the success of The Martian may be attributable to its relatively modest budget ($108 million) – that is, Scott, who last brought us Prometheus (2012), having to do more with less.  The CGI is barely visible on this primarily dusty palette.  And Damon, who has to carry much of the picture with his narration to a computer log, seems to be reacting to a tangible reality (even if he’s not).

The film also benefits from shrewd casting of supporting roles that are, for the most part, rather thankless for the actors, but will seem comfortably familiar to the audience.  Most notably, Jeff Daniels channels his Newsroom persona as the chief administrator at NASA.  Chiwetel Ejiofor and Donald Glover are utterly convincing as two very different types of scientists who you wouldn’t even notice were African-American unless you’re so inclined to keep score.  And this time around, Jessica Chastain actually gets in on some interstellar action.

At almost two and a half hours, The Martian lacks the urgent energy of Gravity (2013) – the recent blockbuster to which it seems to draw the most comparisons.  Notwithstanding the obviously similar setups, Gravity is a different kind of film with different purposes.  But on its own terms – as more of an amped-up riff on Apollo 13 (1995) – The Martian works quite well.

Expressing an appreciation (or lack thereof) for all sorts of films for over 25 years.
Previous: Goodnight Mommy (2015)
Next: A Non-Believer’s Musings on Stations of the Cross (2015)