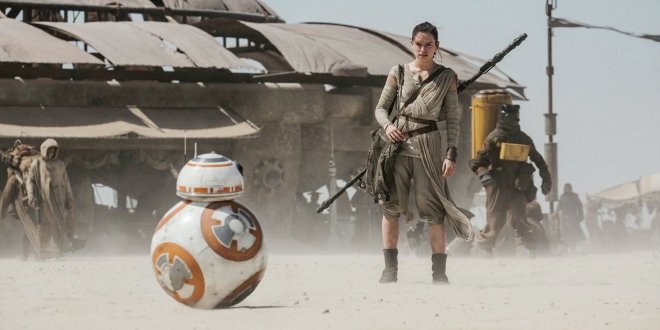 Posted by: Steven on December 18, 2015 in Movie Reviews Leave a comment

To be sure, The Force Awakens is not just a movie; it is the beginning of the third chapter in the ultimate film franchise, and it is being released in an era where franchising is king.  As such, the long-awaited return of Star Wars inevitably presents some rather pressing questions, as least from a marketing perspective.

Although often touted as “reinventions,” the franchise formula emerging from last summer’s Jurassic World (2015) and this fall’s Creed (2015) suggests a dual approach to harvesting from the original films: (1) repurpose the most effective narrative beats for a new generation of viewers; and (2) include plenty of call-outs to provoke the nostalgia of the older generation.  The Force Awakens certainly follows that same formula, as Han Solo’s appearance in the trailer suggests.  But the audience for Star Wars is a bit more complicated: the Gen Xers waited in lines at theaters to see a trio of movies (Episodes IV, V, and VI) that were ground-breaking in terms of cinematic myth-making; the Millennials were introduced to the original films through small screens and DVD players and were offered a set of prequels (Episodes I, II, and III) that was outclassed by both The Matrix and Lord of the Rings trilogies; and today’s kids, the target consumers for the toys and the future of the franchise, would seem to be excluded by The Force Awakens‘ PG-13 rating.  Can the Walt Disney Company, which acquired the Star Wars and Indiana Jones franchises for a cool $4 billion, please all of these constituencies?

And then there is the response to the crushing disappointment with original creator and writer/director of the last chapter, George Lucas, who has since been deposed and replaced by director/co-writer J. J. Abrams.  Not only did Abrams successfully reboot another sci-fi fantasy franchise (Star Trek (2009)), but he has been dubbed a Star Wars “superfan”.  So now that a fanboy has been given the creative control, will the fanboys finally be happy?

In terms of box office and popular sentiment, only time can answer these questions.  I can only opine on how The Force Awakens fares among the other installments of this space opera.

While Abrams certainly ushers in a fresh, contemporary look to this familiar universe, The Force Awakens reflects a concerted effort to rely upon real environments and practical effects.  And when CGI is utilized, the results are positive (the new droid, BB-8) to mixed (the Hobbit reject, Supreme Leader Snoke).

Fans will also be heartened to learn that Abrams enlisted veteran Lawrence Kasdan (co-writer of The Empire Strikes Back (1980), Return of the Jedi (1983)) to share screenwriting duties.  And yet, while much of the popular vitriol with the last trilogy was directed at Lucas’ writing, his dialogue for the film that started it all was hardly Shakespearean.  This series has always relied upon exposition for building that galaxy far away.  Perhaps much of the perceived distinction in quality of between the two previous trilogies can be attributed to the delivery of all that stilted dialogue: Carrie Fisher, Harrison Ford, and Mark Hamill could sell it; Jake Lloyd, Hayden Christensen, and Natalie Portman could not.  Beyond the obviously favorable return of Ford, Fisher, and Hamill, Abrams has wisely allocated the lead roles to newcomers John Boyega, the stormtrooper defecting his way to redemption, and Daisy Ridley, the Arthurian scavenger wrestling with destiny.  Combined with the support of Adam Driver as the villainous fanboy and Oscar Isaac as the comic swashbuckler, the cast of The Force Awakens brings back the right balance of melodrama and humor.  And oh, how wonderful it is to have fun in a Star Wars film again.

Expressing an appreciation (or lack thereof) for all sorts of films for over 25 years.
Previous: Spotlight (2015)
Next: The Hateful Eight (2015)