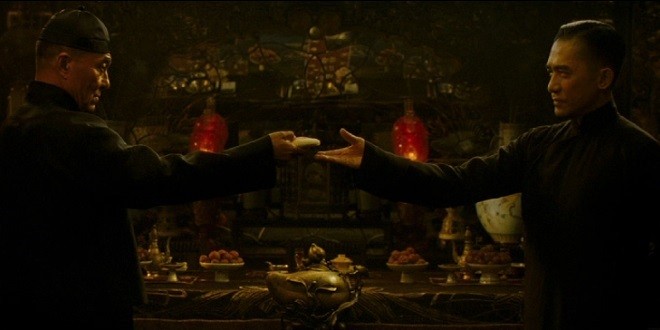 Posted by: Steven on October 22, 2013 in Movie Reviews Leave a comment

As of the date of this review, there are multiple cuts of the Chinese-language film, The Grandmaster (2013) – most notably, the original cut for Chinese audiences (130 minutes) and Harvey Weinstein’s cut for American audiences (108 minutes).  This review is based on the “International Cut” (124 minutes), which was originally screened at the Berlin Film Festival.  For a detailed comparison of the Chinese and American cuts, click here.

The Grandmaster is a loose biopic of Mr. Ip or “Ip Man” (director Wong Kar-Wai regular, Tony Leung), the legendary kung fu master who would go on to train Bruce Lee.  Flashforwards and flashbacks aside, the primary narrative spans from 1936 to 1952.  At the outset of the film, Gong Yutian (Qingxiang Wang), the master who consolidated various schools of martial arts and brought together the styles of the North and the South of China, shows up in the southern city of Foshan (and hometown of Ip Man) to announce his retirement and curiously chooses to dub two heirs – his best student, Ma San (Jin Zhang), as his successor in the North, and the yet-to-be-determined-by-consensus master of the South.  Ip Man emerges as the prime candidate for the latter; but Ma San and Gong Yutian’s daughter, Gong Er (Ziyi Zhang), have their own conflicting ideas about the succession of the house of Gong.  In the midst of all this feudal drama, the Japanese invade and occupy southern China, impoverishing the once wealthy Ip Man and decimating his family.  Throw in some echoes of Kar-wai’s own In the Mood for Love (2000), and you have some epic potential – or should I say, potential for an epic.

With his first film since My Blueberry Nights (2007), Kar-wai is clearly on the top of his game – particularly in the first third of the film, which is set mostly in a magnificent golden mirrored brothel.  The mix of choreography and cinematography in The Grandmaster is both elegantly unreal and uncompromisingly brutal.  Each of the dozen or so fight sequence play like a dance, scored to its own unique mood – an aspect accentuated by Kar-wai’s obsession with the feet of the participants.  By comparison, the wire-bound action of Crouching Tiger, Hidden Dragon (2000) looks cartoonish.

Not surprisingly to those familiar with Kar-wai’s work, the narrative can best be described as a swift and dense series of events.  To the uninitiated to martial arts lore or Chinese history of the 20th Century, the primary problem will be the scant connective tissue between these events.  Many sequences are introduced with narration, subtitles, and intertitles; but some are not.  Most of the sequences appear in chronological order; but some do not.  To the typical Western viewer, the film may seem impenetrable.

But setting issues of cultural literacy aside, The Grandmaster seems to fall fundamentally short of its ambitions – certainly in terms of character development.  On the one hand, Ip Man’s wife (Song Hye-Kyo) is so richly introduced at the beginning of the film only to be jettisoned once Gong Er arrives on the scene.  On the other hand, three scenes featuring a well-dressed gangster named Yixiantian (Cheng Chang) randomly pop up in the second half with virtually no context.  (Indeed, the name “Yixiantian” does not appear until the intertitle preceding the third and last of the scenes.)

Although it is difficult to assess what has been lost in translation in a film like The Grandmaster, one cannot help but feel like there was either way too much or way too little left on the cutting room floor.

Expressing an appreciation (or lack thereof) for all sorts of films for over 25 years.
Previous: Ain’t Them Bodies Saints (2013)
Next: The Counselor (2013)