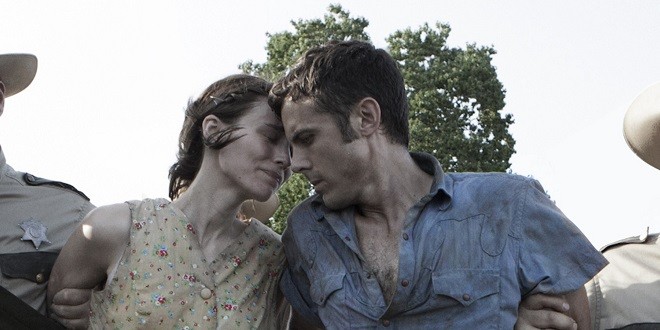 Posted by: Steven on August 23, 2013 in Movie Reviews Leave a comment

Think about a narrative film as a journey across a rapidly flowing river.  One filmmaker might erect wide, study, well-paved roads – designed for maximum functionality, accommodating both cars and pedestrians, to make sure nobody loses their way.  Another filmmaker might demand more of the traveler, stretching a flimsy rope bridge while missing a few planks.  In his first major feature film, writer/director David Lowery has bet that we know our way across this particular river and has opted to drop a few large stones – some farther apart and more slippery than others – leaving us to hop our way across.

Ain’t These Bodies Saints opens as a variation on the Bonnie and Clyde story.  Bob Muldoon (Casey Affleck) and Ruth Guthrie (Rooney Mara), the young star-crossed lovers, are separated as Muldoon takes the blame when an undisclosed crime goes wrong – landing himself a 25-year prison sentence while the pregnant Ruth is left to the care of their adoptive father (Keith Carradine) and a policeman who has taken a genuine interest in her (Ben Foster).  Four years into his sentence, Bob escapes from prison and treks back to be reunited with his lover and daughter.

Although ostensibly set in east Texas in the early 1970s, Lowery’s visuals – alternating between muted sepia tones and kinetic handheld shots – evoke both a distant old west and a contemporary small town aesthetic.  Whatever Lowery is trying to accomplish, his style certainly makes for an engrossing experience.

On a textual level, Lowery (whose reputation has been built primarily on short films) goes for abbreviation.  There is very little character development.  Plot is often implied.  Attraction is expressed by long glances across rows of church pews.  As such, the actors need to do some heavy lifting.  Mara (who bears a striking, and somehow appropriate, resemblance to P.J. Harvey) proves once again to be up to the task.  Foster brings subtlety to the would-be protagonist/interloper, often drooping his head in conversations with Ruth like any well-mannered, shy Southern man-boy should.  But the linchpin of Ain’t These Bodies Saints is Affleck, whose casting seems to be tied too tightly to his performance in The Assassination of Jesse James by the Coward Robert Ford (2007).  Affleck is a good actor but lacks a certain charisma necessary to convincingly portray Muldoon – a character who has a penchant for telling enigmatic stories in an otherwise scant script.  And although Lowery is clearly a talented director, those stories could use some work.

(Now see, one can write a review of this film without a single mention of “Terrence Malick” or “magic hour.”)

Expressing an appreciation (or lack thereof) for all sorts of films for over 25 years.
Previous: A Skeptic’s Guide to the West Memphis Three Documentaries
Next: The Grandmaster [International Cut] (2013)