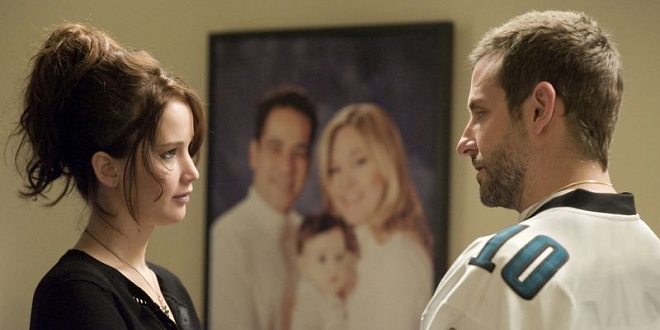 Posted by: Steven on November 16, 2012 in Movie Reviews Leave a comment

The film opens with Paul (Bradley Cooper) just being released from an eight-month stay at a Baltimore mental hospital into the custody of his parents (Robert DeNiro and Jacki Weaver).  We learn very early that Paul suffers from bipolar disorder, but what actually landed him in a plea bargained institutionalization is only revealed gradually through the first half of the film.  Motivated by the hope of winning back his wife, Paul is on a mission – he has lost weight, he is working out, he is reading.  And most of all, he is trying to keep it positive – with mixed results at best.  Meanwhile, Paul’s best friend (John Ortiz) and his wife (Julia Stiles) figure it would be a good idea to surreptitiously bring together the only two crazy people they know – the second being Tiffany (Jennifer Laurence), who recently lost her husband of three years and is struggling to emerge from her own cycle of depression and nymphomania.

In adapting the novel by Matthew Quick, writer/director David O. Russell (Three Kings (1993), The Fighter (2010)) combines a narrative and a set of characters that is both conventional and unconventional.  It is a precarious fence to straddle.  And even at two hours, there is a certain sense of  abruptness to some of the relationship development.  (e.g., A sibling pops up inexplicably in mid-story.)  Ultimately, a film like this lives (or dies) on the strength (or weakness) of the performances.

Like George Clooney, there are certain roles that Bradley Cooper will never be able to sell.  He is just too tall, too well-proportioned, and too blue-eyed.  But unlike Clooney, Cooper is able to use that warm glow and likeability as leverage for something more.  And to get through the first half of this film, we need to sympathize with Paul, as he stumbles to keep it together in the midst of what may be a serious sense of self-delusion.

But the real star here is Jennifer Lawrence (Winter’s Bone (2009), The Hunger Games (2012)).  In what appears to be her first comedic starring role, she brings a certain Juliette Lewis circa 1990s vibe to a character that, in lesser hands, could have been played for mere farce or black comedy.  But it is clear that Lawrence got the delicate balance in tones within the script.  Her verbal delivery is just funny enough when it needs to be, and her eyes convey just the right undercurrent of profound loneliness, to bring some depth to Tiffany.

To put it simply, I wanted to follow these characters.  And Russell plays certain cards close enough to his chest that I was not entirely sure where these characters would take me.  Ultimately, that is enough to distinguish this film as one of the best of the genre.

Expressing an appreciation (or lack thereof) for all sorts of films for over 25 years.
Previous: Skyfall (2012)
Next: The Worst Trailer of the Year: Why I Will Not Be Seeing Lincoln (2012)*