Movie Reviews The Seven Deadly Sins in Cinema: There Will Be Blood (2007) | Aflixionado 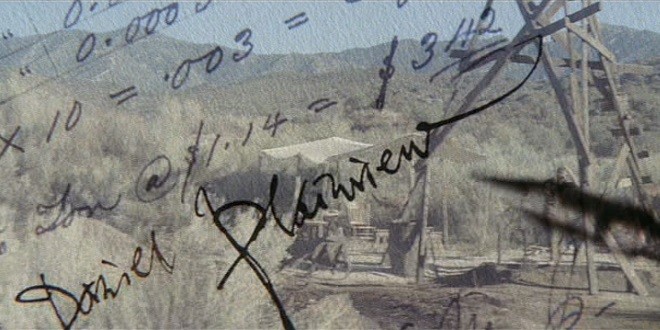 Posted by: Steven on August 30, 2014 in Film Essays Leave a comment

As the enigmatic character Gordon Gekko famously declared, greed clarifies.  Indeed it does – too much so.  Greed is necessarily premised on the need to keep score when it comes to power – whether it be financial, political, religious, or otherwise.  For many, it’s a more comfortable world to live in – to be able to measure the worth of every person in dollars and cents, acreage, rank, etc. – but in doing so, we necessarily lose sight of all that matters that cannot be resolved on a ledger.  And it can also be a means of escape.  Are you incapable of being a good friend, lover, spouse, child, or parent?  Or perhaps, the problem is everybody else.  The solution: Build up that score until it’s high enough to never feel fear or emptiness.  The disclaimer:  Enough is never enough.

The first prologue to writer/director Paul Thomas Anderson’s ominously titled There Will Be Blood (2007) opens with an equally ominous musical cue – reminiscent of György Ligeti’s Requiem, which envelopes the discovery of the proverbial tree of knowledge/violence in 2001: A Space Odyssey (1968).  It’s 1898, and a weathered man with a rifle strapped to his back (Daniel Day-Lewis) is forcefully applying pick to rock, evoking sparks.  This is no fast-talking salesman who happens to have been lucky enough to have landed on Wall Street, pushing paper rather than used cars.  This is Daniel Plainview – a solitary force of nature.

As he falls down the literal and proverbial pit, not even a broken leg will stop him from making his claim to a fistful of gold.  As Quentin Tarantino has put it, this introduction gives Plainview a kind of “heroic right” to engage in everything else that happens through the rest of this epic film.

As the century turns, the gold has turned black, and although Plainview has cleaned up (in more ways than one), his determination remains.  A touching shot of his newly adopted infant son, H.W. (orphaned in a rig accident), fades quickly into the first monologue of the film – a pitch to a town with oil leaking down from a hill.  But as the room erupts in arguments, he takes his leave (“I wouldn’t take a lease from you as a gift!”).  Discord means delay, and time is of the essence when the opportunity to extract is everything.  Instead, he immediately secures a lease from a family just outside of town, from a more difficult entry point, by leveraging the fiction of he and H.W. being “a family enterprise.”

When Plainview rolls into the untapped mecca of Little Boston, California in 1911, he makes the familiar trickle-down promises to the town (a school, roads, irrigation, crops) – not that he cares about economic growth.  Independent to a fault, Plainview also abhors the big corporations like Standard Oil that swoop in to exploit the more ingenious and industrious individuals such as himself – not that he cares about any other hard-working people.

The thorn in Plainview’s side is Eli Sunday (Paul Dano), whose slightly shrewder brother Paul (notably, also played by Dano) tipped Plainview off to the opportunities lying in wait under his family’s ranch.  Although Eli is the aspiring minister of the Church of the Third Revelation, his ascendance coincides with the town’s newfound wealth.  And although he is not immune to the allure of a fast buck (a shortcoming that ultimately seals his fate), Eli’s self-worth is ultimately measured by the size of his flock.

“All religion, my friend, is simply evolved out of fraud, fear, greed, imagination, and poetry.”

While the community of Little Boston certainly buys in, Anderson is digging in the dirt for a uniquely individual story – not an institutional or societal one.  As a cautionary tale in the most general (but no less powerful) sense, There Will Be Blood is stripped of the link between the sins of acquisition (greed) and consumption (gluttony).  We never hear any self-righteous protagonist ask how many yachts Plainview can ski behind or see Plainview snorting blow off of a hooker’s ass (or whatever the equivalent would have been at the time).  To be sure, Plainview conspicuously indulges in another cardinal sin; but as he prostrates himself before Eli’s congregation to be “saved” – ridiculed for abandoning his boy – even his pride can no longer compete with his greed, as he mutters “there’s a pipeline” just under his breath with the faint tone of self-satisfaction.

Much has been made of Anderson’s preoccupation with family.  But by the time we meet Plainview, family represents no more than the hope of a self-centered connection – an ideal partner, but only in the sense Plainview can dominate that partner.  As a person who “hates most people,” Plainview formally takes on a purported half-brother, Henry (Kevin J. O’Connor) – about the same time he abandons H.W. – because Plainview feels Henry must be like him.  But when Henry proves to be an imposter, that hope also dies, as the familiar musical cue arises again.

In the epilogue to the film (1927) we find an adult H.W. visiting the reclusive Plainview to announce that he intends to start his own oil company in Mexico.  Plainview’s immediate reaction: “This makes you my competition.”  That is all that there is to Plainview, as he taunts H.W. and frees him from any notion that they share a lineage.  As that interchange ends, we see a flashback to a bittersweet moment between them; but to Plainview, those glimpses of affection are merely symptoms of a vestigial humanity – none of which undermine the reality that H.W. was little more than a prop in a pitch.

And so in the final scene, Plainview is found by his butler and a visiting Eli passed out in the middle of the basement bowling alley of his mansion.  In its most elemental and abysmal manifestation, greed is not about raising the boat for everybody, it’s about winning a zero-sum game.  It is a message that Plainview confessed to his would-be brother earlier in the film (“I have a competition in me – I want no one else to succeed”), and in the wake of Plainview mocking Eli’s sense of family and religion, it is the last message Anderson wants us to remember.

Indeed, the last line that Plainview exclaims before dispatching his nemesis is telling:  “I told you I would eat you!”  And so is the very last line of the film: “I’m finished!”  There are no FBI agents to slap handcuffs on Plainview – no comeuppance from society, with its wishy-washy implication that the Gekkos and Belforts of the world just got too greedy.  Rather, in delivering on the promise of its title and the tone of that opening musical cue, There Will Be Blood is ultimately a story about self-destruction and how profoundly pathetic it really is when a man overcome with greed actually gets what he wants.