Movie Reviews Review of The Place Beyond the Pines (2013) | Aflixionado 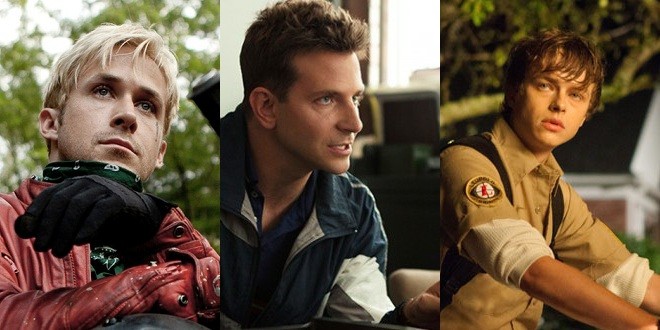 As the credits rolled at the conclusion of the 140-minute The Place Beyond the Pines, I immediately wondered if the film is as successful as the novel in conveying the three distinct-but-related stories of fathers and sons.  And much to my surprise, I found out that the screenplay – penned by director Derek Cianfrance (Blue Valentine (2010)) and relative newcomers, Ben Coccio and Darius Marder – is not based on a novel at all.  (The title is a loose translation of the Mohawk word “Schenectady,” which is also the upstate New York town where the film is set.)

The tragedies laid before us occur both on and off the screen – some are sudden and violent, and others are slow and corrosive.  Luke (Ryan Gosling), a carnival stunt rider who grew up without a father, wants to provide for his newborn son but lacks a legitimate skill set to do so.  Avery (Bradley Cooper) rebels against his own father, a politically savvy judge (Harris Yulin), by entering the police force after law school – only to later experience the rebellion of his own son A.J. (Emory Cohen).  Jason (Dane DeHaan) struggles to find his own identity in terms of his father.

As subtlety tends to be a rare commodity in epic dramas of interconnected lives, perhaps it is best to describe The Place Beyond the Pines in terms of what it is not.  Thankfully, there are no plagues of biblical proportions (Magnolia (1999)) or heavy-handed socio-political agendas (Crash (2004)).  Rather, the ambition of The Place Beyond the Pines lies in creating and conveying characters who are morally textured with varying shades of grey.  Cianfrance’s long and uninterrupted takes from the first person draw the viewer deep into their perspectives.  And Cianfrance’s efforts are fueled by one of the best ensembles in recent memory.  While much has been made of the shorthand casting of Gosling (ostensibly in full Drive (2011) mode) and Cooper’s “stretch” into a rather conflicted role, more should be said of the supporting cast of Ben Mendelsohn, Bruce Greenwood, Ray Liotta, Mahershala Ali, and most notably, Eva Mendes and Rose Byrne as the women charged with dealing with all of these men in crisis.

When all is said and done, The Place Beyond the Pines offers no grand answers to the age-old debates of nature versus nurture – only muted parallels and bittersweet ironies.  And all of that would be fine – even refreshing – but for the odd timing of the film’s emotional crescendos.  That said, Cianfrance is betting we will care enough about the characters to care about the film, and perhaps it’s a bet worth making.  But for many viewers, I suspect that the overall experience may beg the question – in constructing an emotionally compelling narrative film, how much subtlety is too much subtlety?

Expressing an appreciation (or lack thereof) for all sorts of films for over 25 years.
Previous: Evil Dead (2013)
Next: A Fantasy in Remembrance: A Review of To the Wonder (2013) with Roger Ebert