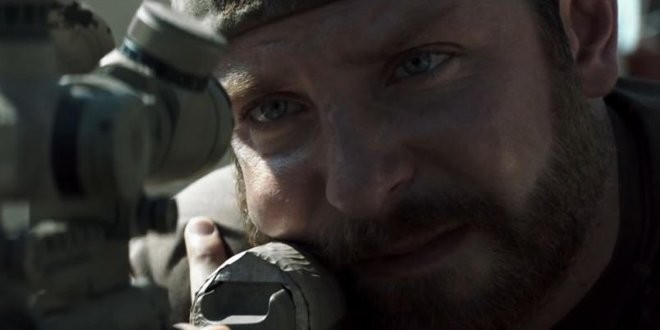 Posted by: Steven on January 17, 2015 in Film Essays Leave a comment

On April 7, 1775, English writer Samuel Johnson reportedly uttered the words, “Patriotism is the last refuge of the scoundrel.”  Put in the proper historical context, Johnson probably meant the other guy’s brand of patriotism.  And of course, Johnson was posthumously diagnosed with Tourette’s Syndrome – a factoid that seems apropos in the post-9/11 America, where any questioning of the wars in Afghanistan and Iraq is broadly considered a blasphemous failure to “support the troops.”

That brings me to the Oscar-nominated American Sniper – Oscar-winning director Clint Eastwood’s adaptation of Chris Kyle’s memoir, American Sniper: The Autobiography of the Most Lethal Sniper in U.S. Military History (2012), featuring Oscar-nominated Bradley Cooper as the rodeo cowboy-turned-soldier.  The film’s six Oscar nominations surprised most (albeit not all) pundits.

“Any other year it may not have been politically correct to support a movie like this … [b]ut given these crazy times, it may seem un-American not to. Americans want to believe that good will triumph over evil and this movie exemplifies that.”

To be sure, there is no denying the growing commercial power of the biopic in generating the dollars that accompany award season crowds.  This year, four biopics were bestowed half of the coveted Best Picture nominations by the Academy of Motion Picture Arts and Sciences, while a fifth (Foxcatcher) was considered by some to be “snubbed” despite five nominations in other categories.  Notably, the stories beneath two wartime biopics that lead the pack in total Oscar nominations – American Sniper and The Imitation Game – share a similar thematic element (albeit from very different perspectives): the irony that belies the hero myth.  (And when I say “irony,” I don’t mean the ha-ha kind.)  Irony can be an especially potent purveyor of truth; however, this isn’t the 1990s – irony doesn’t sell in contemporary America, especially when the subject is war.

American Sniper was supported by one of the most effective trailers of this award’s season (consisting almost entirely of the first scene in the film), and the tension from the trailer permeates the primary narrative of Kyle’s four tours of duty in Iraq.  In turn, each of those episodes – pitting Kyle, “The Legend,” against the “The Butcher” of al-Qaeda and his own deadly sniper – is abruptly (and appropriately) broken by the suspicious calm of Kyle’s returns home to his wife (and later, children).  With the exception of a handful of scenes (e.g.,  a grateful Marine confronts Kyle in an automotive repair store stateside), the familiar beats (i.e., civilians just don’t understand) are portrayed in familiar ways.  And beyond a look of trepidation here or a stop at a stateside bar there, Eastwood never really exposes any weaknesses in Kyle or his appealingly and appallingly simple moral code (the world is made up sheep, wolves, and sheepdogs) – the latter of which is fittingly passed down in no uncertain terms from father to son at the beginning of the film.

As it turns out, however, an unfortunate thing happened eight months after Warner Bros. announced its intent to adapt Kyle’s autobiography with Cooper producing.  On February 2, 2013, the retired-from-combat Kyle, in the midst of his practice of rehabilitating vets by taking them out to the shooting range, was shot and killed by a Marine who is claimed to have suffered from PTSD (Eddie Ray Routh, who is currently facing capital murder charges).  And how Eastwood handles the end of Kyle’s life confirms the film’s ultimate purpose.

In “The Tragedy of the American Soldier” (The Atlantic, January/February 2015), James Fallows (a member of a presidential task force on defense reform) critiques the contemporary U.S. military, as well as the American public and its political leadership as “will[ing] to do anything for the military except take it seriously.”  In doing so, Fallows traces the cultural evolution of what he describes as a “chickenhawk nation” (a claim not devoid of its own irony, considering Fallows’ own service history):

“The most biting satirical novel to come from the Iraq-Afghanistan era, Billy Lynn’s Long Halftime Walk, by Ben Fountain, is a takedown of our empty modern ‘thank you for your service’ rituals. It is the story of an Army squad that is badly shot up in Iraq; is brought back to be honored at halftime during a nationally televised Dallas Cowboys Thanksgiving Day game; while there, is slapped on the back and toasted by owner’s-box moguls and flirted with by cheerleaders, ‘passed around like everyone’s favorite bong,’ as platoon member Billy Lynn thinks of it; and is then shipped right back to the front.

The people at the stadium feel good about what they’ve done to show their support for the troops. From the troops’ point of view, the spectacle looks different.  ‘There’s something harsh in his fellow Americans, avid, ecstatic, a burning that comes of the deepest need,’ the narrator says of Billy Lynn’s thoughts.  ‘That’s his sense of it, they all need something from him, this pack of half-rich lawyers, dentists, soccer moms, and corporate VPs, they’re all gnashing for a piece of a barely grown grunt making $14,800 a year.’  Fountain’s novel won the National Book Critics Circle Award for fiction in 2012, but it did not dent mainstream awareness enough to make anyone self-conscious about continuing the ‘salute to the heroes’ gestures that do more for the civilian public’s self-esteem than for the troops’.”

I could not help but think of these words as I watched the conclusion of American Sniper.  Kyle’s death is reduced to a mere intertitle, with the undeniable and incendiary irony smothered by a red, white, and blue credit sequence that includes footage of Kyle’s memorial service before thousands gathered at Dallas Cowboys stadium.

Endings matter.  Endings contextualize.  And with American Sniper, what little subtlety, nuance, and honesty Eastwood brings to the table is sacrificed to a populist sentimentality that not only dictates that we not speak ill of a departed veteran, but that we not speak ill of war.  It is one of the most corrosive manifestations of patriotism – a detached participation in the rituals of reverence that enables a collective ignorance of the real price being paid by real people.  And those rituals can occur in cinemas as well as in football stadiums.  By ending this dramatic rendering just short of his ultimate fate, Kyle is demoted from human being to hero, and American Sniper is reduced to an exercise in flag-waving for the chickenhawks.   In this sense, Mr. Eastwood, you sir are a scoundrel.