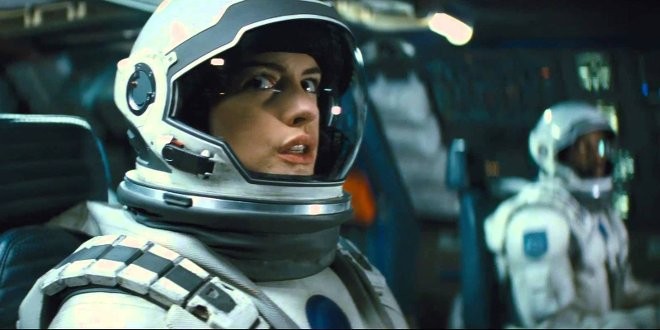 Posted by: Steven on November 7, 2014 in Movie Reviews Leave a comment

As the modern god (or devil) of middlebrow cinema, writer/director Christopher Nolan’s primary strength (or weakness) is his penchant for abbreviating the narrative beats.  And this aspect is indispensable (or overdone) in his latest film, Interstellar, where time is relative and characters need to traverse galaxies in mere minutes to save humanity.  Whether or not this particular approach works throughout the 169 minutes here is certainly debatable.

On the positive side of the ledger, Nolan’s films rarely get dragged down by the need for the overwrought sentimentality.  In fleshing out the father-daughter relationship at the heart of Interstellar (along with co-writer and brother, Jonathan), it is downright refreshing not to have to endure another “human moment” variation on the dinner table scene in Jaws (1975).  (Not coincidentally, director Steven Spielberg passed on this script.)   And Nolan never feels the need to continuously beat the audience over the head with the themes.   No, just a couple of swift blows here and there will do.   That said, in a time when his contemporaries are blowing up the budgets with tired and pandering Old Testament epics (I’m talking to you, Darren Aronofsky and Ridley Scott), Nolan gives us an admirable glimpse into a future that has relented to the red state culture of science deniers.  He also offers something for those of us who watch a documentary like For All Mankind (1989) with a distinct sense of loss, as our collective wonder has been reduced to lines at an Apple store and our space programs have been outsourced to corporations intent on jamming the orbit with satellites for faster iPhone connections.

On the negative side on the ledger, that machine-gun approach to plot tends to squander the talents of the A-list cast (Matthew McConaughey, Anne Hathaway, Jessica Chastain, Matt Damon, Casey Affleck, and Michael Caine).  More than any other film in his oeuvre, Interstellar relies heavily upon all those characters having to explain pseudo-physics 101.  Ultimately, the audience’s suspension of disbelief requires a delicate balance between science fact and science fiction.  But in the third act, that balance is clearly lost as the Nolan brothers inexplicably manage to be both inartfully expository and maddeningly vague in equal measure – as if trying to have their cake (à la Contact (1997)) and eat it too (à la 2001: A Space Odyssey (1968)).

All that said, the sheer craft and boldness of the visuals and sounds of Interstellar are pure genre gold.  Once again in contrast to his contemporaries (again, Aronofsky and Scott), Nolan’s use of CGI is barely, if ever, noticeable.  The score by Hans Zimmer – this time, including some unlikely organ work – is characteristically dramatic.  So although Interstellar may just be Nolan’s weakest film, his big beautiful failures are still a hell of a lot more engaging and entertaining than what currently occupies space in the multiplex.

Expressing an appreciation (or lack thereof) for all sorts of films for over 25 years.
Previous: Gone Girl (2014)
Next: The Battle of the Invasions of the Body Snatchers!