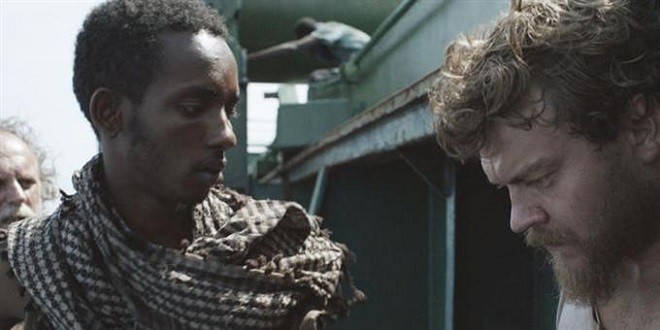 Posted by: Steven on July 7, 2013 in Movie Reviews Leave a comment

To the average American viewer, there is a distinct sense of certain cold hard reality to modern Scandinavian films – even when the filmmakers are having a bit of fun (Rare Exports (2011), Headhunters (2012)).  A Hijacking – the first film by Danish writer/director Tobias Lindholm to receive a worldwide release – is a particularly hard punch in the gut.

The story (such that it is) begins with a shipping vessel headed back to port, with cook, Mikkel (Pilou Asbæk) chomping at the bit to return to his wife and young child.  Back home, Peter (Søren Malling), the CEO of the shipping company, shows he can drive a hard bargain with his Japanese competition.  But the ship is unexpectedly hijacked by Somali pirates outside their normal geographic range.  And so begin the harrowing attempts to reach a deal between Peter and Omar (Abdihakin Asgar), the negotiator enlisted by the pirates.

On its surface, A Hijacking is a complex exercise in tension – between captor and captive, between upper management and the criminal underground, and between the first world and the third.  The narrative choices deliberately direct the viewer’s attention and distinguish A Hijacking from the Hollywood norms.  (Contrast the latest biopic, Captain Phillips, to be released this fall.)  Conspicuously, the hijacking itself occurs off-screen, so we are never emotionally imbued with a need for righteous revenge.  This is not a film about heroes and villains.  And we never learn exactly what Peter is authorized to offer the pirates, lest the film devolve into a simple indictment of the West’s reduction of all that is important to dollars.  Rather, the focus is placed on the three-way communication and the uncertainty of the whole affair.  Peter is clearly in over his head and harbors a certain degree of hubris, but he is far from the one-dimensional CEO stereotype.  Omar’s protestations of independence from the pirates border on the embarrassing and do nothing more than create eggshells.  And Mikkel is the very real human cost in the whole transaction.  In terms of the art of negotiation – applied in an environment devoid of the rule of law and the importance of reputation – A Hijacking emphasizes how the ultimate medium of exchange may be time.

Lindholm submerges some socio-political issues just below the surface (e.g., the portrayal of the ostensible dichotomy between the corporate strategy room full of suits and the cramped sweaty captain’s quarters full of pirates), but stops just short of advancing an agenda.  But with the film presented in an almost documentary shooting style (read: matter-of-fact), we are never prodded to feel antipathy toward either the company or the pirates.  For that matter, we are never really asked to feel that much of anything for anybody.  Although A Hijacking has sufficient atmosphere, it may be a bit too economical when it comes to emotion.  So when the much-anticipated ending finally lands, you may be left with the feeling that you should be feeling something more.

Expressing an appreciation (or lack thereof) for all sorts of films for over 25 years.
Previous: Man of Steel (2013): The All-American Jesus, Now More Than Ever … Unfortunately
Next: Only God Forgives (2013)