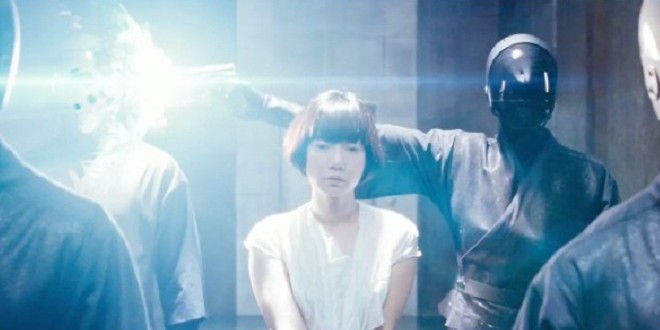 “Middlebrow” is typically used as a derogatory term by the snobby to describe an attempt to create something that is both broadly accessible and worthy of artistic merit.  Personally, I do not think there is a damn thing wrong with straddling this illusory fence – particularly in the case of Cloud Atlas, co-directed by Tom Tykwer (Run Lola Run (1998)) and the masters of middlebrow cinema, Andy and Lana (formerly Larry) Wachowski (The Matrix (1999)).

Based on the purportedly “unfilmable” novel by David Mitchell, the movie alternates between six different storylines set in 1849, 1936, 1973, 2012, 2144, and some point even farther into a post-apocalyptic future.  With a solid cast of actors playing roles of varying importance in all six storylines (most notably, Tom Hanks, Halle Berry, Jim Sturgess, James D’Arcy, Jim Broadbent, and Doona Bae), the relationships, the visuals, the plots, and the themes of each story (e.g., slavery) are all interwoven.

I am not sure who the target audience is for this particular product, which has been reported to be the most expensive “independent” film ever made.  The art house cabal will probably find the film to be too unsubtle in its dishing out hackneyed Taoist sentiment complete with spoonfed narrations and obvious musical cues.  For the multiplex masses, the movie will likely be too ambiguous and subversive – particularly with respect to its length, its R rating, and the blasphemous way it portrays suicide and messianic figures.

But even if you are as unmoved as I was by the quasi-spiritual elucidation, there is much to appreciate in Cloud Atlas as one glorious ode to storytelling itself.  The last act in particular explicitly deals with its nature and power, the sacrifice of factual truth, and how narratives cycle round and round.  And these concepts permeate the formal elements of the film as well.  Not only do Tykwer and the Wachowskis adeptly shift between various genres and tones, but within each storyline, there are wonderful details to be found if the viewer is willing to peel away the expository layers.  (e.g., There are two references to an infamous 1973 sci-fi/satire – the first that plays as a joke, and the second as deadly serious – although neither appear in the 1973 storyline.)

To be sure, Cloud Atlas does not always realize its ambitions.  Tykwer and the Wachowskis could have relied on their truly effective editing to advance the themes and left all the voiceovers on the cutting room floor.  And at time, the makeup is forced to the point of distraction (e.g., Hugo Weaving’s take on Nurse Ratched seems plucked from the world of Monty Python).  But when all is said and done, this particular exercise in cinematic ambition deserves three hours of your time.  On second thought, make that six, or nine …

Expressing an appreciation (or lack thereof) for all sorts of films for over 25 years.
Previous: My Five Favorite Film Adapations by the Master of Horror: Stephen King
Next: Finally, Stanley Kubrick’s Elusive Fear and Desire