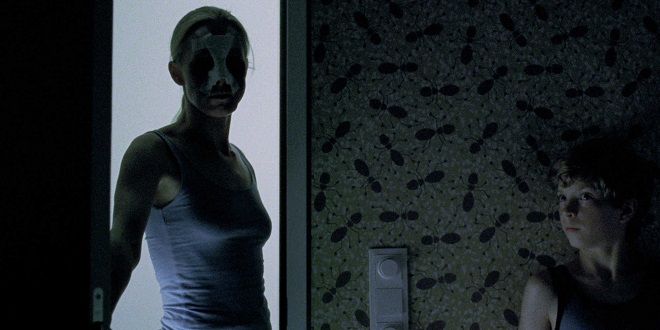 Posted by: Steven on September 14, 2015 in Movie Reviews Leave a comment

One of my disappointments with last year’s sleeper frightfest, The Babadook, was that the filmmakers flirted with, but ultimately abandoned, a fundamental emotional disassociation between a mother and her young son.  The notion that the maternal bond might actually break, when exposed to enough stress and trauma, remains relatively taboo.  But in Goodnight Mommy, co-writers/co-directors Veronika Franz and Severin Fiala more shrewdly exploit that taboo.

A cold war brews between a mother (Susanne Wuest), who has returned to her country house with her face hidden by post-surgery bandaging, and her nine year-old twin sons (Elias and Lukas Schwarz), who have come to suspect that she may be an imposter.  (Gaps from the family album, as well as deliberately fuzzy art photos hung prominently on the walls, do not help.)  However, building suspense – normally the prime directive for this genre – takes a back seat to the filmmakers’ other ambitions.  Narratively speaking, Franz/Fiala leave the twisty reveals to the end of the movie, and some commentators have observed that “[s]avvy viewers, weaned on several decades of ‘mind-blowing’ plot revelations, will spot [said twists] coming a country mile away” with “feeble attempts to throw us off its scent.”  But in terms of directing images and interactions, for better or for worse, Franz/Fiala never intend to hold their cards too close to the chest.  From the opening sequence, they want us to have unsettling suspicions, as the film plays less like a puzzle to be solved and more like a ghostly provocation brimming with subtext.

At their best, Franz/Fiala manage to evoke the likes of Georges Franju, Ingmar Bergman, Roman Polanski, Terrence Malick, Lars Von Trier, and Michael Haneke – a rather diverse group of filmmakers – in a way that feels organic (as opposed to an exercise in film-spotting á la Quentin Tarantino).  At their worst, they stray too far into the territory of Eli Roth.  Indeed, the efficacy of Goodnight Mommy will ultimately depend on whether the individual viewer experiences the pointed excesses of the endgame as an earned payoff for, or a disappointing betrayal of, the film’s cloudy sense of dread.  But setting aside the third act and the unfortunate change in the film’s original title (Ich seh, Ich seh, or “I see, I see”), the level of visual composition on display here is among the best of U.S. releases in 2015 – a year characterized by a surge in arthouse horror (e.g., Creep, It Follows, Spring, A Girl Walks Home Alone at Night).

Expressing an appreciation (or lack thereof) for all sorts of films for over 25 years.
Previous: A Non-Feminist’s Musings on The Diary of a Teenage Girl (2015)
Next: The Martian (2015)