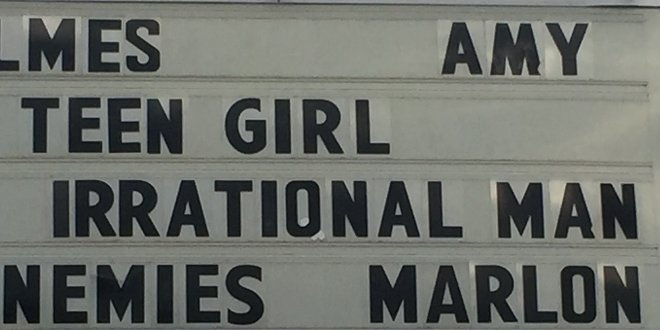 Posted by: Steven on August 30, 2015 in Film Essays Leave a comment

Truth be told, we non-feminists find most self-proclaimed feminist cinephiles to be alienating –  perhaps deliberately so, considering the tendency to use terms like “institutional” in such a manner and to such a degree that one would get the impression that we live in a world where the White Male Club meets in secret on Thursday nights to come up with new and exciting ways to stick it to women, minorities, etc..  For those prone to frequent online forums, ad hominems pretty much stifle any intellectually honest discussion of issues of gender in cinema.  And yet – and I have spoken to other members of that WMC on this (Tuesday night is movie night) – the unfortunate side effect to this lack of discourse between the non-feminist and feminist factions of cinephiles is the failure to recognize a certain common ground.  That is, it seems that the vast majority of those who tend to see a lot of movies are also tired of seeing the same types of characters doing the same types of things.  So notwithstanding my permanent membership in the WMC, I too have long grown weary of the white-male-in-midlife-crisis narrative, and I too can have a loving appreciation for films like Welcome to the Dollhouse (1996).  And although I may question the imposition of reductive measures of political correctness or the efficacy of simple prescriptions for making the world of cinema a better place, that skepticism does not diminish the pleasure that I take from hearing a fresh voice challenging viewers.

At the risk of anecdotally disproving my own positions on certain said prescriptions, that brings me to the feature film debut of screenwriter/director Marielle Heller, an adaptation of the Phoebe Gloeckner novel, The Diary of a Teenage Girl.  The fresh character’s voice in this instance is that of Minnie (Bel Powley), who navigates the hazy post-sexual revolution/pre-AIDS world of San Francisco circa 1976, burdened by her own myriad emotions, in and around a partially checked-out mother (Kristin Wiig) and her somewhat suspect boyfriend (Alexander Skarsgård).  Minnie doesn’t look or sound like a 15 year-old American girl in a Hollywood movie – that is, as the standard adult filmmaker would like American parents to see her portrayed.   Visually, Minnie is caught between gawky and confident, stuck in a state of self-aware, pre-sexual attractiveness; verbally, she is at once frank and articulate, embracing and rejecting the contradictions of herself and those around her.  (It helps that Powley, a 23 year-old Brit with eyes that seem genetically engineered for acting, turns in a career-making performance.) In terms of challenging the viewer, reading a number of viewer comments about the film online exposes the degree to which Heller disregards that uniquely American myth, enshrined in its criminal laws, that children (especially female) should not – and indeed, would not (but for the prurient and exploitative interests of the media and certain adults) – have any sexual consciousness (much less sexual activity) until that magical 18th birthday – upon which they are, quite suddenly, bestowed with agency, wisdom, and a moral compass.  Movies often speak truth to the power of myth, but some myths are clingier than others.  That is, appreciating any portrayal of a 15 year-old female who acts on her undeniable sex drive tends to evoke guilt in the average American viewer, as though it is necessarily exploitative for any filmmaker to do so.  Setting aside the fact that our big world is bound to be populated with a few souls who harbor a fetish for just about anything, there is little within The Diary of a Teenage Girl that could be construed as fuel for the masturbatory fantasies of a child predator.  Perhaps what is most bothersome is the rendering of such a character without the didactic specters of pregnancy or STDs.  That’s not to say Heller is blind to the negative consequences to sex; rather, Heller chooses to focus on the consequences that matter most to the character whose point of view is supposed to matter.  In Minnie’s experience, there is surely good and bad.  The truth is complicated.

I don’t know how The Diary of a Teenage Girl looks through the lens of correct gender politics, and frankly, I don’t care.  But it seems to me that there is a compelling new voice emerging in Heller, and the really relevant question is whether that voice will continue to evolve on its own terms or become a “diversity” token in an industry of known quantities.

Expressing an appreciation (or lack thereof) for all sorts of films for over 25 years.
Previous: A Nightmare on 8 Mile Road: It Follows (2015)
Next: Goodnight Mommy (2015)