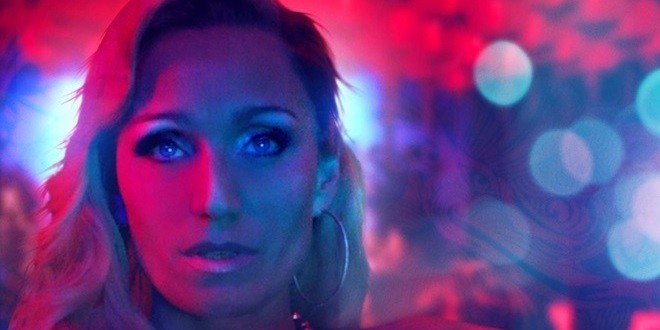 Posted by: Steven on July 21, 2013 in Movie Reviews Leave a comment

As the title to his new film suggests, writer/director Nicolas Winding Refn is not concerned with the godly virtues – only blood and justice.  The blood is certainly thicker than water.  And the justice is old world.

That blood runs through Crystal (Kristin Scott Thomas), her first son, Billy (Tom Burke), and her second son, Julian (Ryan Gosling).  Americans Billy and Julian train fighters in Bangkok as a cover for more illicit activities.  But when Billy is found bludgeoned to death early in the film, Crystal treks overseas to exact – or more accurately, instigate – revenge on behalf of the family business.  As it turns out, most of what we learn about Julian comes from his mother, and beneath all of his post-Oedipal scar tissue, there is barely a human being to be found.

The justice takes the form of Chang (Vithaya Pansringarm), a modern plain clothes cop who uses a sword as his means of dispensation.  Chang also serves as that singular masculine force of nature which has become such a hallmark of Refn’s films.  As Crystal turns the focus of her vengeance upon Chang, the part western/part opera narrative begins to emerge.

Regardless of whether one appreciates what Refn is trying to achieve, his casting choices are undeniably brilliant.  Barely recognizable with a moniker that would make Seth McFarland proud, Kristin Scott Thomas’ presence generates a particularly effective and appropriate sense of cognitive dissonance.  And Gosling’s conspicuous return as the silent-type protagonist immediately following Refn’s Drive (2011) might just be the most subversive statement in the film.  Whereas Drive was a more easily digestible romantic fable with Gosling’s nameless character shrouded in mystery, the gorgeously nasty Only God Forgives pulls back the curtain just enough to plant the idea that perhaps there may be little difference between the impotent heroes in these seemingly disparate films.

Although the end credits include a dedication to director Alejandro Jodorowsky (El Topo (1970)), it is the work of David Lynch (Inland Empire (2006)) that seems to haunt this picture the most.  In one prominent set piece, Refn builds his own kind of red lodge to house Julian and his psyche in a kind of surreality, filled with corridors and doorways, where time just seems to move more slowly.  And the synthetic menace of Cliff Martinez’s score is punctuated with interludes of mirrorballed karaoke, which while true to modern Bangkok culture, is also certain to evoke images of Julee Cruise in the minds of Twin Peaks fans.

In the final analysis, Only God Forgives is first and foremost an exercise in visual storytelling, and more than any of Refn’s prior films, the form is the substance.  Of course, this critical cliché only begs the question – what exactly is the substance?

Expressing an appreciation (or lack thereof) for all sorts of films for over 25 years.
Previous: A Hijacking (2013)
Next: The Hunt (2013)