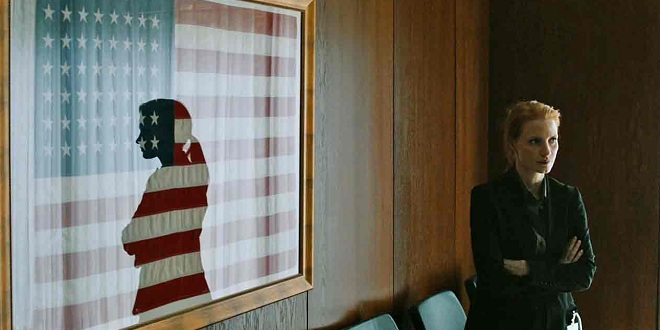 Posted by: Steven on January 10, 2013 in Movie Reviews Leave a comment

Director Steven Spielberg has often been accused of making “emotionally manipulative” films, to which he responds (to paraphrase) – that’s the whole point of making a movie.  That said, the relevant question behind a very legitimate criticism of Spielberg’s films is not whether a film is manipulative, but how the filmmaker chooses to manipulate.  Is the emotional impact earned through an artfully developed (dare I say, original) character and/or plot?  Or does the filmmaker rely upon cheap tricks (e.g., abruptly putting children in peril, John Williams stringing on the sap)?

Zero Dark Thirty begins with a blank screen as audio tapes of the phone conversations with the doomed of 9/11 play.  A cheap trick?  Perhaps.  But one could also make the argument that the opening is merely an emotional touchstone for a film that is all business.

Ostensibly, this is the story of “real life” CIA operative “Maya” (Jessica Chastain), which begins as she joins veteran operative “Dan” (Jason Clarke) at an anonymous “black site” in 2003.   Waterboarding and sleep deprivation are dished out liberally in attempts to obtain mere names and email addresses – the smallest of pieces in the largest of puzzles.  Maya gets used to it.  And as the film progresses, she brings her own muscle to her own interrogations, and eventually, develops her own agenda.

We start the film know nothing about Maya or any of her co-workers.  We learn nothing about them as individuals.  They learn nothing about themselves other than the pragmatics of the pursuit.  And yet, Zero Dark Thirty works as much more than a pseudo-documentary.  Ironically, all of the external controversies about the accuracy of the various details of this film – in particular, questions about the real Maya’s identity and credibility – prove to be wholly irrelevant.  And that is because director Kathryn Bigelow is a compelling storyteller, even if screenwriter Mark Boal is not.  One could devise a drinking game from the number of shots where Maya’s face shares the screen with an American flag.  Bigelow does not intend to portray Maya as a relatable human being, but more as a personification of America’s desire for justice against the party most responsible for 9/11 – Osama bin Laden.  Maya stood in stark contrast with cynical neocon bureaucrats of the Bush administration who were expressly unconcerned with our pentultimate enemy.  And the fact that we only know Maya in terms of her obsessive pursuit only serves to make the final line of the film all the more powerful.

But an emotionally powerful ending is not enough.  At least two hours of this film could be fairly and concisely summarized as follows:  lots of time passes, lots of dead ends are pursued, co-workers are lost in the line of duty, and institutional and individual frustration ensues.  The details the viewer must endure matter very little.  Boal seems to be less concerned with providing a narrative that is engaging from start to finish and more concerned with showing off his journalistic ability to regurgitate the minutia – in this case, a good number of individuals whose names the average viewer will never be able to keep straight.  Similarly, Chastain’s best moments – which tend to be more visual than verbal – appear at the very beginning and the very end of the film.  But in between, we get a lot of the one-note bitchiness – even for a character who is obviously intended to have a mythically defiant quality – but not much else.

Zero Dark Thirty has certainly made an impression among American reviewers, as it appears on virtually every annual top 10 list.  But we are less than two years from the historical event that concludes the movie.  Ten years from now, will cinephiles still consider Zero Dark Thirty to be among the best films of 2012?  I’m not so sure.

Expressing an appreciation (or lack thereof) for all sorts of films for over 25 years.
Previous: My Favorite Film of 2012: Moonrise Kingdom
Next: Rust and Bone (2012)